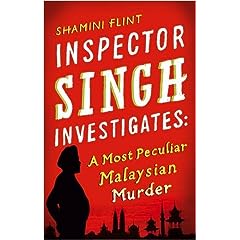 I am immersing myself in things Malaysian at the moment, in preparation for the forthcoming Burgess conference in Kuala Lumpur. That’s one of the reasons I’ve changed my banner to a picture taken last year in Kuala Kangsar. So I was intrigued by this book: it must be the only English language detective story set in KL, I imagine. The detective is Inspector Singh, a Sikh seconded to Malaysia from Singapore in order to investigate the killing of a leading businessman, apparently by his estranged former model wife. My heart sank when Singh was described as a maverick in the opening pages (do fictional police forces contain any non-mavericks?) but the story soon picked up, and engaged me enough for me to finish it in two days. The author, Shamini Flint, is a former lawyer and also an environmental activist, so it’s no surprise that aspects of Sharia law and a subplot concerning illegal logging are integral to this novel.
The picture of KL that emerges is one that will be familiar to those who have been there- certainly, the bustle, the grime, the contrasts, the traffic were all elements I noticed on my visit, and are all evoked well here. My one criticism of Shamini’s use of local colour is that she usually feels obliged to explain quirks of behaviour, or cuisine, as if she doesn’t quite trust her reader to accept her knowledge. I wondered if it was the heavy hand of an editor with an eye on the anglophone market.
Singh, whose character maybe owes something to HRF Keating’s Inspector Ghote, keeps one step ahead of his Malaysian colleagues in a murky tale of corruption, bluff and passion. I enjoyed it, and look forward to the next in the projected series, to be set in Bali.
Shamini Flint is obviously very much a genre writer, and there’s nothing wrong with that- but the burgeoning Malaysian literary scene contains some seriously impressive writers, and I will be turning to them in a future post. Meanwhile, this is a promising beginning, and Singh is a distinctive addition to the crowded detective story marketplace.

Boris the Bold
The Only Living Boy
Comments (2)