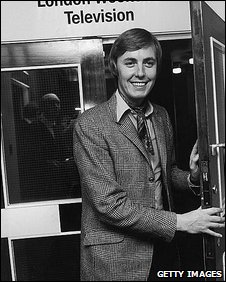 It’s a never-failing indication of creeping old age when icons of your youth die. I’m old enough to have been enthralled by Simon Dee’s tea-time show on TV. To an adolescent in grimy Moston, he seemed effortlessly cool, roaring off into the sunset in his E-type as the credits rolled at the end of the show. He was one of the first people who were famous for being famous- he had no discernible talent other than handsome features and a pleasantly unforced television manner. He seemed at the time to epitomise the new youth culture, as it took over the bastion of the establishment, the BBC. What happened after his flop at LWT is quite shocking. There were a couple of comeback attempts, but essentially, this man spent half his life on the scrapheap.