More music on this allegedly literary blog. People often claim to have very broad musical tastes, but this is frequently not borne out in fact. When some starlet or reality TV show participant says something like “Oh I love all kinds of music – anything from Rihanna to the Pussycat Dolls” you sense that their idea of music isn’t, shall we say, particularly well-developed.
Jools Holland, whom God preserve, said on his radio show recently that it really annoyed him when people said of a particular artist or type of music “Oh sorry, before my time” as if anything that existed before they were born could not possibly have any relevance to them. Yes, quite. Thus, I feel happy with a really wide range of music. I never understood rap, in which I always find the c is silent, and I’d rather folk songs were sung by folk, instead of Peter Pears. And don’t ever take me to your lieder. Apart from that, though, pretty much anything goes. So here’s the latest eclectic mix of live music encountered by me and ‘er indoors.
Quatuor Danel

If you are occasionally in Manchester on a Thursday lunchtime, and you need sustenance of the musical kind, the Martin Harris Centre is the place to be. This innovative centre presents regular free concerts at lunchtime, and recently this string quartet gave a performance of two standard repertoire items, Haydn’s String Quartet op.1 No 1 and Mozart’s String Quartet KV 465 together with a brand new piece by Pieter Schuermans. The Haydn and the Mozart were sublime, and the concentration of the players noticeable. I particular enjoyed the flourish which the leader, Marc Danel, brought to his work. The Schuermans piece was, as they say, “challenging”, but was played with enormous attack by the four musicians, and the single long movement impressed with its energy.
>Damien Maddison

Damien recently went solo after some time with his band Maddison – there were, in the time-honoured phrase, musical differences. Damien appeared as part of the annual In the Cityevent at The Moon Under Water, a huge Deansgate pub. We went with the estimable local DJ and rock chick (she wishes) Caroline Rennie. Damien played with a pick up band, with whom he had one hour’s rehearsal. Considering that, he was pretty good, and the current highlight of his set, the withering “Absolutely Tib St.” (spot the Dylan reference) was certainly enhanced by the beefed-up electric sound. Damien’s work is recognisably in an English singer-songwriter tradition, and whilst he clearly owes something to people such as Ray Daviesand Ian Broudie, he has a distinctive voice and a great facility with words. “Absolutely Tib St.”, which is even more effective when you know what occasioned it, spits out bile in splendid fashion – and it’s not often you come across “sanctimonious” in a pop lyric.
The Unthanks 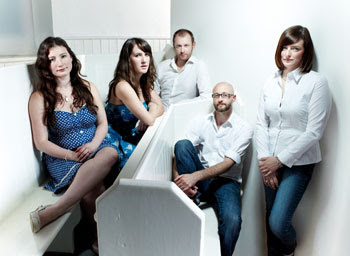 To the newly refurbished Band on the Wall, last visited by me 27 years ago. It’s changed a bit, as have Rachel Unthank and the Winterset, now officially The Unthanks. Ten of them crowded on to the small stage. The line-up is basically a string quartet, two brass players, drums, bass, keyboards, guitar, and various other instruments- all the players swapped instruments at regular intervals. The ethereal sound of Rachel and her sister’s voices, that made the previous incarnation of the group such a success, is preserved in the big band version, but with hugely improved capacity for new textures and modulations. It helps that they have gathered some brilliant multi-instrumentalists around them, even if some of them looked like they had wandered in from the school band rehearsal. Great harmonies, some really unusual songs -not just folk – and some fantastic playing. The venue is mainly standing, but if you get there early, you can sit on the balcony, which is what we did.
So- an eclectic few days, and lots more to come in the musical maelstrom that is Manchester.