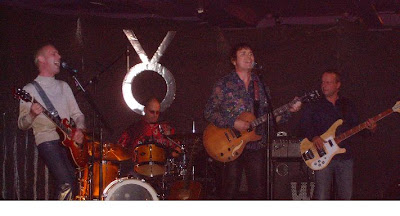 Too busy to blog much of late, but thought I would mention a gig by The Visitors. They were at The Studio in Manchester to launch their new CD, and a small but select band were there to see it. They are led by Karl Walsh, a Madchester scene veteran, and play power pop with some interestingly subtle vocal arrangements, mainly as a result of the interplay between Walsh and the other lead singer, Mike Crook.
As the website and video suggests, they’ve gone for a visual vibe that owes a lot to fifties science fiction, particularly, it seems to me The Day The Earth Stood Still, with Walsh as Klaatu. That’s reflected in the song Visitor, which puts them in the select bracket of groups who have written a song with their own name as the title – Living in a Box springs to mind.
At the gig, from which my eardrums have just about now recovered, two weeks later, Karl turned up in silver lycra, but the rest of the band obviously didn’t fancy the look, so there was a curious mismatch. From left to right, we had Klaatu, Mike as Steve Harley, and, behind them, er, two blokes who’d turned up from the council to collect your old fridge on bass and drums. Still, the sound, particularly from bassman Paul Petricco was prodigious, and, with a bit of exposure, there’s no reason why they shouldn’t do well. I’d drop the silver lycra though.