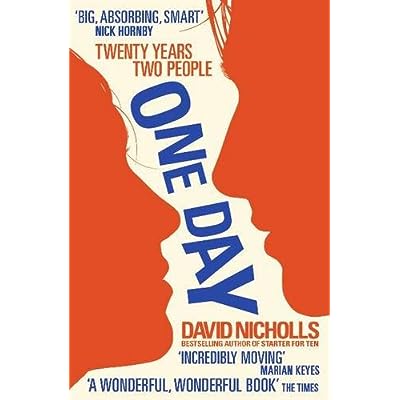 This is the kind of book that I don’t normally read. It is a book group choice, heavily discounted on the shelves of the supermarket, and promoted through its own website. But I heard the author David Nicholls interviewed on the radio, and he seemed a very engaging cove, so when I saw the book at a ludicrously cheap price in the supermarket, I thought I’d give it a go.
I’m glad I did. Nicholls has had success before it seems, having written a bestseller that passed me by, and episodes for a “programme” that may be viewed on Mr Baird’s televisual apparatus. On this occasion, he has written a quirky love story whose central conceit is that, rather as in The Good Soldier, all the major events happen on a particular day. We first meet the protagonists on the night of their graduation on St Swithin’s Day, 1988, and revisit them on that day each year after that until 2008. Emma is a clone of the persona Lucy Mangan presents in her Guardian column: sassy, northern, funny, but consumed with self-doubt. Dexter is the middle-class loafer who has drifted through his degree, and whose ego never allows him to realise how fortunate he is. After a one-night stand, the two agree to remain friends, and we encounter them as they make their way through late Thatcherism and into the Blair years. Em has a succession of awful jobs before ending up as a teacher. The hilarious account of life as a waitress in a Mexican restaurant will put you off your enchilladas for a while. Dex lucks into a career as a vapid TV presenter, all Mockney accent and laddishness. The structure allows a kind of annual report on the vicissitudes of their lives, and affords also a running social history of the last twenty years. That’s the book’s great strength, to my mind: its sharply observed vignettes of popular culture and and fashion, from lattes to boutique hotels, from Islington’s yummy mummies to the cult of the DJ. It presents a very recognisable and at times painfully accurate portrait of the nation we have become in the last quarter-century.
The tone is often jokey, veering from first to third person, with much interior monologue, and you get a real sense of the developing sensibilities and preoccupations of the main characters. There’s also an ending which I didn’t see coming, and which knocked me for six. Definitely a cut above what you might expect, given the ghastly front cover and torrent of endorsements on the endpapers from such authorities as Heat and Jenny Colgan. Recommended!

One Day by Dr Rob Spence is licensed under a Creative Commons Attribution-ShareAlike 4.0 International License.

They Still Don’t Get It
The sublime Ella
Comments (2)