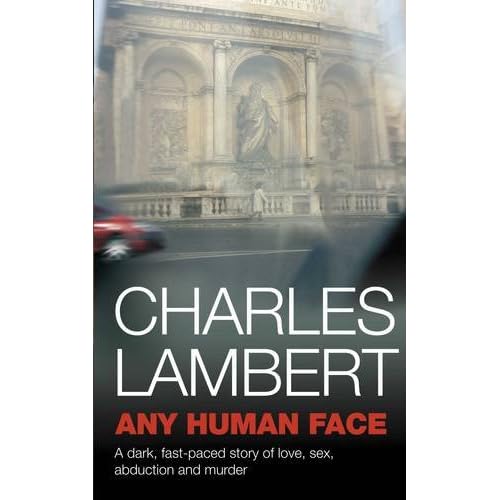 After enjoying Charles Lambert’s Little Monsters so much, I was looking forward to his latest novel, Any Human Face, and I was not disappointed. Set in Rome, this novel is a fast-paced and dark tale of murky deeds in high and low places, recounted from multiple perspectives over a span of nearly three decades. What Hitchcock would call the McGuffin (and there is something Hitchcockian about this) in the tale, is a set of photos, entrusted by an investigative journalist to his gay lover on the night of his (the journalist’s) brutal and apparently homophobic murder. The photos come into the possession of Andrew Caruso, half Scottish, half Italian, whose shambolic existence centres around the secondhand bookshop he runs. Soon, he is involved in a frightening chain of events that may have something to do with the journalist’s murder, a quarter of a century earlier.
Lambert handles a complex narrative with great authority, moving in cinematic style from the near present day (2008) to 1982, to 1985 and back, each time focalising his narrative through the perspective of one of his characters. One of the many things I like about Lambert’s work is that he doesn’t give the reader an easy ride. There is not here, or in Little Monsters, a character with whom we can readily empathise – all of them have their frailties and vulnerabilities. They are all too human in their failings, and Lambert’s unflinching and unsentimental portrayal of their interlocking lives is a fascinating exercise in close observation. Paradoxically, because Lambert is so good at unfolding the delicate nuances of individual behaviour, the reader soon becomes involved in this seedy world of clandestine affairs and shabby deals, and does indeed care about the fate of the protagonists. Indeed, I found that this was one of those books that demanded to be read through as quickly as possible, so immersed did I become in this world.
There are dark hints throughout at institutionalised corruption, whether of the church or the state, but the focus throughout remains on the human story, and how we are all connected, in ways we can’t begin to comprehend. I was struck by one passage on this theme, where Alex, the journalist’s lover, reflects on the transient world he is part of:

“All these nameless friendships that entangled the city in a taut invisible web. A secretive web, because no one knew anything about it, or everyone pretended to know nothing about it. A web that stretched across hotels and galleries and studio flats in the richest parts of the city, from the Vatican to the senate to the station, of favours and small, sweet acts of generosity and asked-for, insisted-on violence. And then it went wrong and someone died, and the web closed to hide the rift so quickly no one would know it had ever been torn. Webs heal themselves.”

This novel is, in concept, an excellent, disturbing, stylish thriller, but one with aspirations beyond the working out of a criminal act. It uses most of the thriller conventions, but goes well beyond them, to offer a story which deals with universal themes, particularly of man’s inhumanity to man, and the dark heart of loneliness at the centre of many lives.

Any Human Face by Dr Rob Spence is licensed under a Creative Commons Attribution-ShareAlike 4.0 International License.