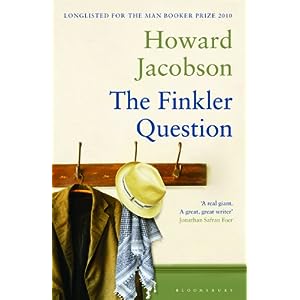 To the new headquarters of the IABF for the first in its series of events with contemporary writers. Mancunian Howard Jacobson was presenting his latest novel, The Finkler Question . What an excellent speaker and reader he is! Too often, writers are not actually terribly good at reading their own stuff, as students in my Modernism class who were subjected to recordings of T.S. Eliot will attest, but Jacobson has a Martin Jarvis-esque command of the spoken word, and entertained us hugely with his lively reading of some extracts from early in the novel.

He answered questions in animated fashion, and really engaged with his questioners. It helped that the questions were mostly well-informed and intelligent, though one, which seemed pretty banal (‘Which books should I read?’) elicited a highly entertaining riff on the importance of the classics. I had a short conversation with him, picking up on something he’d said about people’s opinions on books, that when stated baldly (“This book is boring”) they are the least interesting thing to say. As he said, an opinion is more about the speaker than the book; only when you show by your close attention to the text what your opinion is based on can you really say what you think. People used to instant responses (e.g. nearly everyone under 30) find this difficult, hence the sort of conversations academics have with students.

He also said something about the complexity of comedy which struck a chord. Earlier that day, I had been talking to a colleague about a mutual acquaintance, who simply doesn’t get irony, or indeed tone at all. Jacobson made the point that comic effects need the reader to engage in order to succeed, in a way a tragic passage doesn’t. Comedy is more intellectually demanding, because you have to work out the joke, to oversimplify a complex point.

The Finkler Question has had excellent reviews, and is longlisted for the Booker. It examines some fundamental questions about life and death, but, if the extracts Jacobson read are anything to go by, does so in a hugely entertaining manner. Review to follow, when I’ve read it. Thanks to all at the IABF for a great event.

Note for Burgessians: he was asked about the review of Any Old Iron.* He said it embarrassed him to read how he had rubbished established writers when he was a young turk, and he wouldn’t say that now. He still doesn’t like it, but was very laudatory about Earthly Powers. So we’ll let him off.
*Note that some deluded person is trying to flog this on Amazon for £155.95, which is £155.94 more than one needs to spend to acquire this fine novel.

The Finkler Question by Dr Rob Spence is licensed under a Creative Commons Attribution-ShareAlike 4.0 International License.