Bonfire of the Humanities 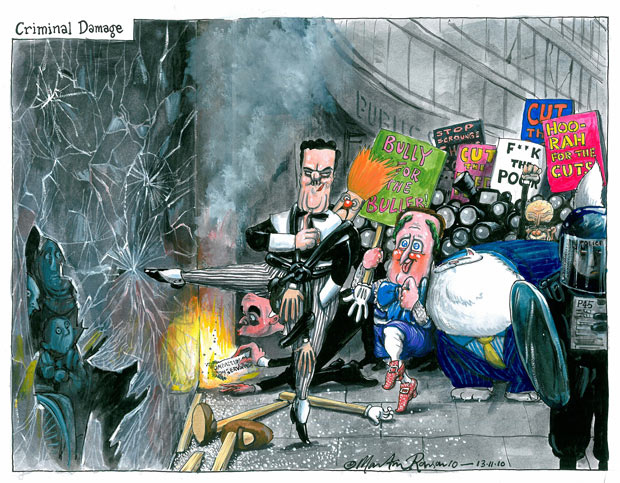 It’s quite likely that I will be out of a job in eighteen months or so. The funding cuts announced by the government in the wake of the Browne review are particularly savage in the subject area where I work, and in the kind of institution where I work. The emphasis on the so-called STEM (Science, Technology, Engineering, Maths) subjects means that, in effect, arts and humanities subjects are going to be denied any funding at all, and will have to survive on vastly increased student fees. The real terms cut for a department like mine in the sector of the university market we are in is about 98%. Whether there is a pool of students prepared to pay those fees is another matter, and it seems clear that lots of departments will close, and it is by no means inconceivable that entire universities will have to shut up shop. And, you know, I somehow don’t think that will be Oxford and Cambridge. Already, redundancies have been announced, and I know of several institutions where departing staff are simply not being replaced.

Since this is my livelihood, I am obviously concerned, but, like any scholar of the humanities, I can see both sides of the argument. The country is in an almighty mess economically. Cuts have to be made. The subjects with practical applications must be privileged. All right, up to a point. But we have been told for the last twenty years that we are now in a knowledge economy, where what matters is the mix of skills you have, and your agility and adaptability in a fast-changing environment. As I pointed out in a previous post, employers are generally not that bothered about the content of a degree; they want people who are smart, articulate, and able to work on their own initiative and as part of a team. So yes, whilst a degree in engineering is clearly very desirable if you want to be an engineer, there are many jobs (70% of graduate jobs according to a recent analysis) where the subject is not specified.

If, as seems likely, we lose much of our traditional capacity in the humanities, and the university sector shrinks as a result, would that matter? The short answer is yes. Stefan Collini, whose brilliant demolition of the ludicrous REF emphasis on ‘impact’ I highlighted some time ago, has produced an equally withering analysis of the Browne review. Here’s a taste, but as with the previous one, you really should read it all.

It is, incidentally, one of the several dispiriting features of this report that even when it shows an inconsistent twitch of non-market reflexes and recognises that there may be a public interest in making sure that certain subjects are offered and studied, it in effect confines these subjects to science and technology (with a token nod to the possible economic usefulness of some foreign languages). The only social value the report seems able to think of is economic: these subjects contribute directly to the economy, it is alleged, and so we must have them. The Comprehensive Spending Review has reinforced this emphasis on science and technology by maintaining the science budget (which supports research, not teaching) at its present level. Browne implies that other subjects, especially the arts and humanities, are just optional extras. If students are willing to cash in their voucher to study them – perhaps because, for some unexamined reason, they are thought to lead to higher-paid jobs – so be it; but if they’re not, then there’s no public interest in having them. Despite the occasional (very occasional) mention of, say, ‘culture’, the logic of the report’s proposals gives such values no independent standing. Overwhelmingly, the general statements announce, with startling confidence, the real point of higher education: ‘Higher education matters because it drives innovation and economic transformation. Higher education helps to produce economic growth, which in turn contributes to national prosperity.’ And just when you might think there was going to be a glimpse of something broader, your knuckles are smartly rapped: ‘Higher education matters because it transforms the lives of individuals. On graduating, graduates are more likely to be employed, more likely to enjoy higher wages and better job satisfaction, and more likely to find it easier to move from one job to the next.’ This report displays no real interest in universities as places of education; they are conceived of simply as engines of economic prosperity and as agencies for equipping future employees to earn higher salaries.

David “Call me Dave” Cameron is fond of saying “we are all in this together”. The trouble is, we aren’t. Lord Snooty and his pals will not be facing any pain at all, because they are all extremely rich, as this article shows. (Sorry about linking to the Daily Malice, but this does graphically illustrate the gap between Dave ‘n’ George and the rest of us). So when Charlotte and Oliver want to go to Daddy’s alma mater to study Art History or Old Norse, that will be fine, because those universities will be able to charge huge fees to people for whom it’s small change, and they’ll be able to keep on their humanities provision. And there’ll be a job at the end of it too – in the city for Oliver with Daddy’s old firm, or running a chi-chi handbag shop in Kensington for Charlotte.

This cabinet of millionaires is happy to consign the life-chances of thousands to the scrapheap, and in doing so to debase our over-materialist culture still further, despite being the beneficiaries of the system themselves. David Willetts (private school and Oxford, degree in that distinctly non-STEM subject PPE, wealth estimated at £2 million) is presiding over a regime he himself declared unfair in his own book. Dave, descended from one of William IV’s bastards (Eton, Oxford, Bullingdon Club, PPE again, personal wealth about £25 million) says “We won’t go back. Look, even if we wanted to, we shouldn’t go back to the idea that university is free.” I never thought it was. When I was at university, I received a grant. It covered the cost of my rent. For the rest, I depended, as everyone else I knew did, on parental contributions. My parents were fantastically supportive, making real sacrifices to help me. But neither they, nor I, were faced with the prospect of a £30,000 price tag for a degree. The chancellor, George Osborne (St Paul’s, Oxford, degree in History, personal wealth £4 million trust fund, heir to a baronetcy) says “Our universities are jewels in our economic crown, and it is clear that if we want to keep our place near the top of the world league tables then we need to reform our system of funding.” OK, George – but reform to you means slashing the budget to almost nothing for the subject you studied at university. I could go on, but you get the idea. It doesn’t help when people like Simon Jenkins write fatuously that “It may be irksome for poor students to see rich ones having their fees paid off by parents, but the rich are always different.” That’s Sir Simon Jenkins, (Mill Hill, Oxford, degree in a subject he seems coy about, but I bet it wasn’t engineering) who has the nerve to say that “There is not an arts course invented that could not be completed in 18 months, and probably not a science one. As for most postgraduate degrees and doctorates, they are plain indulgences.” Oxford terms are eight weeks…

So today I’m thinking about some of the students I met again at our recent event featuring Billy Collins and Carol Ann Duffy. I’m thinking of student A, a single mother, who did our access course to gain a university place, and worked her socks off for six years to get her richly deserved first class degree part time. She then did a year’s teacher training, and is now enjoying the challenge of teaching English to a new generation. I’m thinking of student C, who came to us with a mediocre degree in another subject, and some years of work in a job he didn’t like. He studied for two extra years to gain a degree in English, because he loved English, and wanted to make it the basis of his career. He too is now a teacher, transmitting that love of language and literature to the citizens of tomorrow. I’m thinking of the mature woman who did our access course, and overcame the death of her husband, a serious accident and a chronic illness to battle through to win her degree. I’m thinking of student L, who entered our university in her late twenties, bored with her office job. She thrived as a student, gained a first class degree, and is now pursuing postgraduate work. For these people, and for countless others, the chance to study the humanities at university has been a life-changing experience. If Dave and his pals get their way, this type of student would never get that chance, and I won’t have the privilege of teaching them.
I hope the brilliant Martin Rowson doesn’t mind me nicking his cartoon. It’s from here.

Bonfire of the Humanities by Dr Rob Spence is licensed under a Creative Commons Attribution-ShareAlike 4.0 International License.