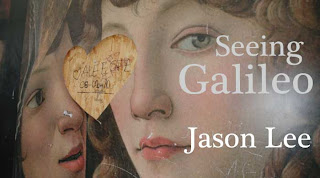 Gylphi, run by my friend Anthony Levings, published this book last month, and it is a strange beast.  I have been trying to make my mind up about it, but trying to categorize it is difficult – it contains poems, essays, playlets, photos and meditations. It’s a collaborative effort, from Jason Lee – no, not that one – and the photographer Rebecca Griffith. This Jason Lee is Head of Film and Media with Creative and Professional Writing at the University of Derby, and an expert on transgression. Certainly, this book is a kind of transgressive artefact in itself, in its resolute defiance of category.
The reader’s experience is, and I’m sure this is deliberate, an uncomfortable one. Beginning like a modern piece of lit crit, complete with scholarly references and a bibliography, it locates John Milton within the contemporary zeitgeist and then swiftly, and occasionally bewilderingly, moves on to introduce Galileo, Prospero and Caliban, the Virgin Mary, Picasso, Fassbinder, T.S. Eliot and a range of other fictional and real characters, inhabiting landscapes real and imagined from New Jerusalem to Pisa, Florence, and beyond. The text is illuminated by Griffith’s evocative black-and-white photographs, taken on instruction by the author in the cities where Milton may – or may not – have encountered Galileo. The central conceit of the book is an encounter between these two figures, which spirals into a consideration of the modern and postmodern world of existential angst and technological carnage. The figure of Milton, the author of Paradise Lost seems to anchor the ancient world, and the figure of Galileo, with his telescope, seems to represent the modern world. Here, in these ancient Italian cities, the two worlds collide, and the two visions inter-penetrate each other. Of course, the fact that both the protagonists went blind adds a further layer of postmodern irony to the idea of what they ‘saw’ – as does the decision to illustrate the book with photographs.
The early poems in the book explore the nature of the encounter between Galileo and Milton using a sometimes daunting range of references and allusions, expressed in ludic and occasionally baffling free verse. Here’s a typical sample from the poem ‘Seeing Galileo I’:

Scrying the inexcusable,
Telling the tale of the future
Of the world corporations only allow;
For the man who posts a letter in every
French box in the city – hold it there, Daguerre…

This is playfully obscure, using, paradoxically perhaps,  the predominant metaphor of the text – sight – to describe a future unknowable to either of Lee’s protagonists. The meaning remains opaque, though, and I wonder about that placing of ‘only’ – might it have been better after ‘the’? And what’s a French box? A letter box, or…? Doubtless the poems will repay further study, and indeed this is a book to return to, as, although it is unified by its theme, it has the feel of a series of loosely connected pieces, an anthology of sorts.
In other parts of the book, critical discourse and historical narrative give way to other types of writing. I was particularly struck by the Edward Bond-style playlet ‘The Four Minute Warning’ which vividly dramatizes our inhumanity in extremis during an apparent nuclear attack.
I’m still not sure about this text. It’s certainly intriguing, and challenging, though sometimes too much so for comfort. But then, I’m sure it isn’t meant as a cosy read.  A couple of stylistic touches did jar, however:  Lee tends to write sentences without main verbs. Like this. As if it’s advertising copy. Which it isn’t. That’s probably me being pedantic, I suppose. I also couldn’t really go along with his occasional baring of the device; for example, he leaves what appear to be notes to the photographer  in his text as annotations. I’m not sure that works, but, like other features of the book, it underlines the boundary-busting nature of the enterprise. On a more positive note, it’s a pleasure to read and to handle such a well-produced volume. The production values are high, and would put bigger companies to shame.
So – a challenging, provocative and original book, that blurs conventional genres and plays fruitfully with our postmodern condition.