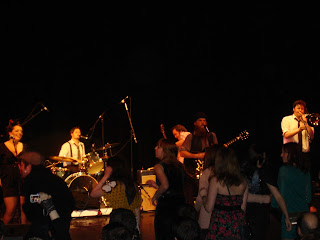 To the Dancehouse with Caroline for a celebratory gig with Louis Barabbas and the Bedlam Six.  The prolific Mr Barabbas has a new album out, but this gig was really a showcase for the band, and an opportunity to feature John Otway, self-styled “rock and roll’s greatest failure”, whose extraordinary career includes two hit singles and being voted seventh in a poll of Britain’s best songwriters – just after some unknown called McCartney.
Much of the gig was organised via Facebook,  and this was a boon, because it meant that punters were able to avoid the stupid admin charges that the ticket-sellers add on. In fact, the whole thing was a great bargain. After paying via Paypal, an email from the band was exchanged at the box office for a ticket on the night, which also entitled you to a CD of the show, and a mention on the cover. Louis certainly isn’t going to be a millionaire any time soon working this way, but he will have a loyal fanbase.
The venue was pretty full, and we arrived just in time for the opening, energetic song. If you haven’t come across Louis Barabbas, imagine a louche, bowler-hatted figure, wild-eyed and bearded like the prophet, frantically strumming a guitar and singing like Tom Waits would if his voice was a bit more gravelly. The band is the usual rock line up – bass, drums, keyboards, lead guitar, rhythm guitar and, er, trombone, used to good effect in most of the songs. Louis shares lead vocals with Alison Cegielka, a sultry chanteuse with a clear, melodic voice. Her duets with Louis – and most of the songs are written to be sung as duets – work surprisingly well, her smoothness complementing the rasp of Louis.
The songs are uniformly dark, dealing with a downbeat world of gloom and doom inhabited by eccentrics, inadequates and losers. If Weill and Brecht had written for rock band, it might have sounded like this. Not for nothing is the Barabbas label called Debt Records. One little line sums up the mood of the songs for me – a character says ” I’m a man of my word, and the word is deceit.”
The gig was divided into three, with LB performing a short opening set, and giving way to John Otway, on his own. 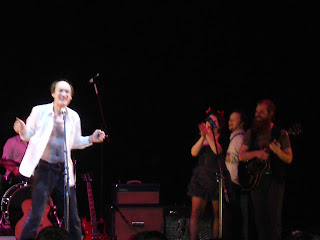 I didn’t know what to expect of him really, dimly remembering his 1977 hit “Really Free” which had a quirky charm. Otway, it turned out, is a natural showman, making much of his apparent amateurishness, and producing a nicely-judged stream of comic and self-deprecating patter. Genuinely funny and inventive, having fun with a theremin and with a bizarre double-necked guitar, which was used to do a cover of Sweet’s Blockbuster. After a tune with the band, Otway left, and the final session was back to Louis and the Bedlam Six. They really raised the roof, and had everyone dancing is the aisles. It was an energising, entertaining night out. Can’t wait for the CD!
Update: ‘er indoors points out that LB has a blog here.