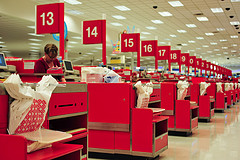 A typical exchange with the spotty youth manning, or teenagering, the supermarket checkout yesterday. After we paid and packed, I said “thanks” and he said “see you later.” Actually, what he said was more like “see yers later”, but that’s besides the point really. Now, unless I’ve missed a very subtle invitation from a boy young enough to be my grandson, he didn’t really mean he’d see us later. He didn’t even mean he’d see us. “Later” has been added to the ubiquitous “see ya” for no apparent reason, as far as I can see. I’m tempted in these situations to say “oh right, where shall we meet?” or something along those lines. It’s another example of how informal speech has replaced formal in situations where two people’s lives intersect briefly. For some reason, we have to appear to be on terms of deep familiarity. “‘Scuse me, mate,” someone said as he approached me for directions the other day.  I’m not his mate, and “excuse me” would do the job. “Cheers,” says someone when I hold the door in a shop. I’m not having a drink with them, merely offering a tiny courtesy. The worst one doesn’t occur in speech, but in email: an increasing number of my students seem unable to complete a message without signing off with a ‘x’. Aaargh!