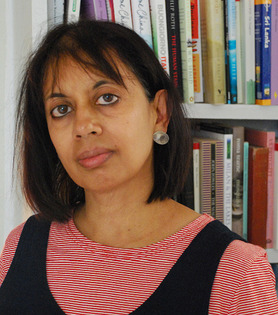 To the place everyone now calls the Burgess for a Manchester Literature Festival event with Roma Tearne. She was reading from her most-recently published novel, The Swimmer, and talking about her career, her novels, her other activities as an artist and film-maker, and, inevitably, about her views on Sri Lanka. She left her native country for Britain in 1964, and has made her life here ever since. Sadly, when someone asked her if she ever planned to go back to Sri Lanka, she replied that it was impossible, given the death threats she has received as an outspoken opponent of the regime.
Most writers, because they are writers and not performers, don’t read their work particularly well. Roma is an exception. She read a passage from The Swimmer beautifully,  bringing a poignancy that was palpable to a scene of great sadness. She answered questions with great good humour,  and revealed a good deal about her working methods. One particularly striking aspect was her revelation that she always starts with an image. In the case of The Swimmer it was a photograph of a windswept Aldeburgh beach on which three figures were walking. She imagined the story of these three characters, and the novel grew from there. Several members of the audience commented on the power of her landscape scenes, and one questioner asked whether she painted landscapes – yes, she does. The evocative atmosphere of the East Anglian coast, with its melancholy emptiness, and sense of liminality, seems an appropriate setting for this tale.
What’s more, she has used one aspect of The Swimmer to inform the film that she made for the Venice Biennale. The novel, which features a plot about a Sri Lankan immigrant,  is used to complement the horrific footage of brutal attacks by the Sri Lankan army on the Tamils during the civil war. The found footage is intercut with the new film, shot on iPhone to merge with the raw images of the massacre.
It was a privilege to have a short conversation with her after the event, and now I must get down to reading the novels, starting with the semi-autobiographical Brixton Beach.