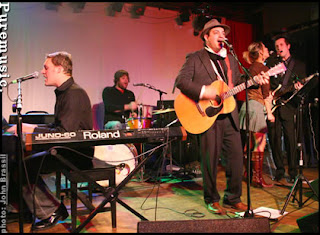 It’s already March, and I haven’t posted this year. I haven’t been completely in hibernation, though – in fact, I’ve quite a lot to report on, so I will start by offering some thoughts on a gig attended last night, and I’ll try to pick out some highlights from the last few months in subsequent posts.
To the Ruby Lounge with ‘er indoors to see and hear Nashville’s Silver Seas. A Twitter comment by Danny Baker, whom God preserve, led me to check this group out, and their work has had, as they say, heavy rotation chez Topsyturvydom since. The line-up for this tour is the core members Daniel Tashian as the front man and guitarist and Jason Lehning on keyboards, with a rhythm section of the impressively bearded Lex Price on bass, and David Gehrke on drums. And they can play! In the awkward space of the Ruby lounge, they soon had a an audience of, shall we say, largely mature people bouncing around and singing out as they ran through a selection of songs mainly from the Chateau Revenge album.
The music is bright, intelligent pop. There’s nothing particularly demanding about it, but Tashian certainly knows how to construct a memorable song, with lyrics that are by turns urbane and wistful. The music is characterised by driving guitars, often ethereal keyboard sounds, and occasional Beach Boy-esque harmonies. The songs have melodies, hooks, and rarely last more than three minutes or so – perfect pop songs, in other words.
Half way through the gig, Tashian announced they had worked up a cover version, and launched into an upbeat rendition of Daydream Believer, accompanied lustily by the audience, in commemoration of the Mancunian Davy Jones. A perfect choice.
My friend Knappsterino often films at venues like this down in Bristol. I noticed several people doing just that, so doubtless the results will be up on YouTube soon. Meanwhile, someone posted a bit of Daydream Believer from the Glasgow gig:

Update: Here’s “Kid” from the Ruby Lounge gig, complete with irritating tossers talking through it:

The Tie That Binds
Ways of Seeing
Comments (1)