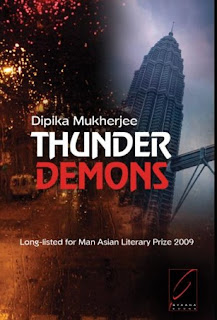 Back in November last year,  my birthday weekend was spent in Amsterdam. We chose Amsterdam because we’d never been there, and because my friend Dipika Mukherjee was hosting the European launch of her novel Thunder Demons there. Dipika is professor of linguistics at Chicago and Shanghai universities, an affiliated Fellow at the International Institute of Asian Studies in the Netherlands, and also writes poetry and fiction. I suspect she doesn’t sleep.
Thunder Demons is a fast-paced thriller whose initial premise is based on an actual event, the mysterious murder of a Mongolian model in Malaysia. Although the work is clearly fiction, the use of a similar murder as the starting point for the action allows Dipika to explore the murky world of Malaysian politics in the context of a swiftly-unfolding story that centres on the intertwined lives of an airport worker, Agni, and an expatriate researcher, Jay Ghosh, who is returning to Malaysia at the prompting of the sinister Colonel S. Although the novel is set in contemporary Malaysia, and the action takes place over the course of a week, the plot delves back into Malaysia’s colonial past for some of its key details.
At one level, this is a love story, but at another it’s a discomforting examination of the state of the nation fifty-odd years after independence. Dipika, who is originally from India, and is married to a Malaysian national, writes tellingly about the tensions that lie beneath the surface of the “truly Asia” Malaysia of the tourist brochures. This is ultimately a dark, occasionally shocking story of political chicanery, casual brutality and racial tension. The thriller aspect makes it a page-turner, but the deeper themes remain long in the mind after the dramatic conclusion.
The novel isn’t available in the UK, but can be had from Amazon US and the usual online sites.