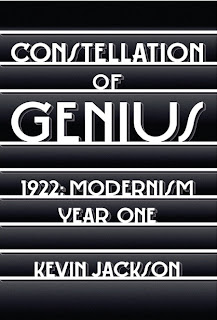 The footnotes – and there are plenty of them – in Kevin Jackson’s brilliant account of Modernism in 1922 are printed in a fetching purplish shade. I wondered, as I read, enthralled, whether this was a subliminal allusion to Eliot’s phrase from The Waste Land,  when Tiresias observes the assault by the  clerk on the young typist:
At the violet hour, when the eyes and back
Turn upward from the desk, when the human engine waits
Like a taxi throbbing waiting…

Even if that isn’t the intention, it’s very effective – as well as being pleasing on the eye, it makes  a welcome visual distinction between the main text and the supporting apparatus. Given the extensive nature of some of the notes, in which Jackson offers contextual and biographical information on his extensive cast of characters, separating the notes visually makes sense.

[digression: when a cocktail bar called The Violet Hour opened near us, I thought someone must be an Eliot fan, but the quotation on their menu was not one I was familiar with. It turns out that someone called Bernard deVoto wrote what he risibly called a “cocktail manifesto” in which the following description of the cocktail hour occurs:

“This is the violet hour, the hour of hush and wonder, when the affections grow and valor is reborn.”

It doesn’t have the menace of the Eliot line, but presumably Mr DeVoto pinched it from Tom, and that’s fair enough, considering how much Tom pinched from others.]

Constellation of Genius is one of those brilliantly simple ideas that seem so obvious once someone else has come up with it: it’s an almanac of the peak year of Modernism, 1922, the year of The Waste Land and Ulysses. The year is reported chronologically,  arranged in twelve (obviously) chapters, with an introductory scene-setting account of the state of play at the start of the year, and a fascinating ‘Aftermath’ section which deals with the post-1922 careers of the main players, and many of the minor ones too. Each month chronicles the events in the lives of the artists, writers,  composers, film-makers, and others who might loosely be said to have formed the avant-garde of the time. Although the focus is mainly on the Anglo-American modernists, with Joyce and Eliot dominating, the scope is very broad, with datelines (also in violet) ranging from New York to Prague, Moscow to Cairo, Tokyo to Granada. Across this global stage strut a dazzling array of characters, vividly portrayed by Jackson: just a few of the figures covered are Eliot, Pound, Joyce, Woolf, Lawrence, Lorca, Hemingway, Forster, Proust in literature; Chaplin, Fairbanks, Eisenstein, Murnau, von Stroheim, Lang in film; Wittgenstein,  Russell, Bateson  in philosophy; Stravinsky, Schoenberg, Gershwin, Louis Armstrong in music; Dali, Breton, Picasso, Matisse, Man Ray in art; an astonishingly diverse supporting cast, as well as cameos from the major political figures of the time, from Lloyd George to Mussolini, with peripheral appearances by Ho Chi Minh, Lenin, Stalin and Hitler. 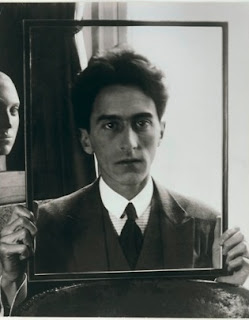 The ambition of this book is to be commended, and Kevin Jackson has fulfilled that ambition brilliantly, producing a narrative that really manages to convey the flavour of that extraordinary year. The diary format works to his advantage, allowing the reader to discover the development of a particular event in stages, such as Eliot’s efforts to launch the Criterion,  juxtaposed with often completely contrasting threads, but all of which contribute to the accumulated sense of an incredibly rich artistic milieu. What really struck me, though, was the domestic detail, often about money – Pound’s efforts to get people to subscribe to a fund to support Eliot, Woolf hoping she could sell her copy of Ulysses for £4.10s, Hemingway marvelling at how luxuriously he could live in Paris because of the exchange rate after the war, Joyce forever seeking patronage. The interconnections between the artists are mapped meticulously, often giving rise to some highly entertaining accounts of chance encounters – Proust and Joyce failing to agree about truffles, or Forster trying to prevent Hardy doing his “Grand Old Man of English Letters” shtick. One method used repeatedly is to give very precise details of the whereabouts of the participants – Woolf isn’t bitching about Katherine Mansfield in Bloomsbury, she’s in a bed that’s been moved to the lounge at Hogarth House; Cocteau isn’t holding court at a Paris night club, he’s at Le Boeuf sur le Toit.

Reading this book reminded me of reading Clive James’s Cultural Amnesia – the same breadth of interest, the same verve in the language, the same eye for the telling detail, and a few overlapping figures. And like the James book, this one leaves me with much more to explore. I do have some quibbles: illustrations would be a great improvement in a second edition (surely there’ll be one?), as would some attention to the dates of Hardy, who’s granted eighteen extra years, and Wells, who’s docked ten. And I’d have liked a mention for May Sinclair’s The Life and Death of Harriett Frean. But these are really very minor matters, and must not detract from a really excellent piece of work, which should be devoured by anyone with an interest in twentieth century culture.

Maybe that new edition will have another item in the bibliography: serendipitously, as I sat down to write this,  I noticed a reference to a new book on Modernism – At the Violet Hour. Looks interesting! 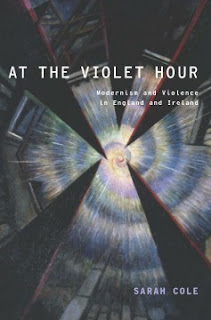 Constellation of Genius by Dr Rob Spence is licensed under a Creative Commons Attribution-ShareAlike 4.0 International License.