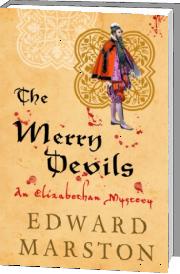 The second volume of the Bracewell mysteries is very much the mixture as before. The familiar figures of the Earl of Westfield’s players, presided over by the calm and commanding presence of Nick Bracewell, encounter a series of baffling events that threaten their livelihood. Our hero’s wit, persistence and fortitude allow him to engineer the obligatory happy ending, though not without some blood-letting on the mean streets of Elizabethan London.

The merry devils of the title are characters in a play of the same name that seems to be jinxed, possibly, according to its co-author, because it uses actual spells from the Malleus Maleficarum. Nick suspects a more worldly source for the trouble, and is eventually proved right, though not before an unexplained death and his own imprisonment disturb his plans. The subplot features a mysterious prisoner in Bedlam, and some dark work at a country estate. As in the first volume, the climax features a performance that is sensationally and bloodily interrupted. The play, a comedy as the name implies, seems very like Jonson’s The Devil is an Ass.

The novel uses essentially the same elements as the first in the series, and is none the worse for that. The sights, sounds, and especially the smells of Bankside and Southwark in the late sixteenth century are vividly evoked. Again, some of the explication is a little laboured, and one wishes Marston veered more towards showing than telling, but it is a minor quibble, and for readers unfamiliar with Elizabethan stagecraft, I suppose it is essential. And, since Marston has been a successful full-time writer of historical fiction for thirty years and more, who am I to criticise?

Marston won’t ever win the Booker, but these novels are more entertaining than many that will. And that should be enough for most. Even then, there are some profound moments, none more so when Dr Mordrake ( a John Dee-like figure) is in conversation with the anguished poet Ralph Willoughby: “The duty of a divine is to justify the ways of God to man. Christianity gives answers. The duty of a poet is to ask questions. That can lead to danger. Religion is there to reassure. Art disturbs.”

The Merry Devils by Dr Rob Spence is licensed under a Creative Commons Attribution-ShareAlike 4.0 International License.