Thinking about Nick Lowe, as I was the other day, and it always strikes me how odd it must have been for him to be Johnny Cash’s son-in-law. He married Carlene Carter, Cash’s stepdaughter, and wrote several songs for Cash, including “The Beast in Me.” Here’s how that song came about, with Cash singing it from about 6:20.

I suppose, though, that it’s not that odd for an English singer-songwriter to be the son-in-law of an American singer-songwriter. A more incongruous match would be Mel Tormé (the “Velvet Fog”) ending up as the son-in-law of the epitome of Northern English kitchen-sink acting, Thora Hird. His third wife, Janette Scott, was Thora’s daughter. I wonder whether he ever sat around the parlour table pouring tea whilst passing around the bread and margarine? Mel was a better jazz stylist than anyone, in my opinion, as you can tell from this:

Thora, on the other hand, is better known for this kind of thing:

Actually, I think my favourite association by marriage has to be between Fred Trueman, dour pipe-smoking Yorkshire and England fast bowler of the fifties and sixties, and Raquel Welch,  improbably-bosomed actress of such high-brow epics as One Million Years BC. Trueman’s daughter married Welch’s son, and in true showbiz style, the wedding was sold to Hello! magazine: 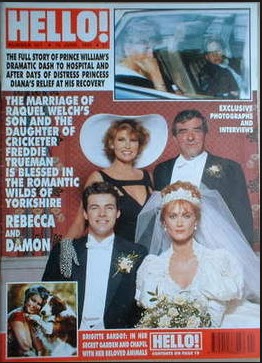 I like to think of Fred explaining to Raquel how his away-seamers skittled out the West Indies in 1959 over the wedding breakfast table.

The Old Magic
The Unexpected Professor