We took the Shinkansen bullet train to Kyoto from Tokyo. These trains are an absolute delight: spacious, smooth, quiet, incredibly fast, and punctual to the second. Mobile phones are banned completely, except in the space between carriages, and even then, you are expected to keep it quiet. The result is a carefree and relaxing journey, everything a typical outing on an English inter-city train is not. And when I say speedy, I mean quick. Our train covered the 318 miles in 140 minutes. We loved the guard, who bowed and greeted the carriage before inspecting tickets. And of course, we had our planned view of Mount Fuji as we sped through the countryside.

Our lodging in Kyoto was a small apartment in a modern block just outside the centre. We took a (surprisingly cheap) taxi to the quiet street on which it was situated, collected the key, and phoned our contact (on the mobile provided) as arranged. She arrived quickly, and was very helpful, showing us how everything worked, and giving us some useful tips about the city. If you want an apartment in Kyoto, you couldn’t do better. Details are here.

We liked the decor – these guys stood guard over us: 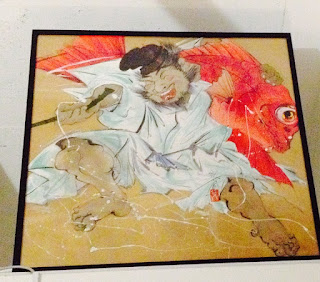 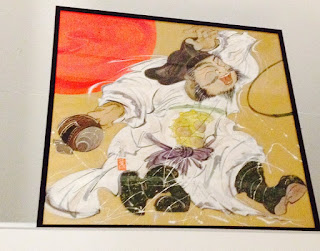 Kyoto is steeped in history, and unlike many Japanese cities, did  not suffer significant damage in the war, apparently at the behest of Roosevelt’s Secretary of State for War, Henry Stimson. We walked out on the first evening to see the Pontocho area, a maze of little alleys packed with bars and restaurants. As dark descended, these places opened for the passing trade, and we enjoyed a stroll along the bustling streets, which are no more than passageways, really. 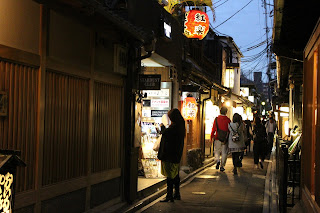 Earlier that evening, we had gone into central Kyoto to eat. One of our concerns before travelling had been about food – we thought Japan was not going to be very veggie-friendly. We were wrong. Whilst most restaurants are heavy on fish and meat, there is plenty for the vegetarian, partly as a result of Japan’s apparent love affair with Italian food. As we had in Tokyo, we found an Italian restaurant, and had an excellent meal with some decent wine. We were also entertained by the waitresses. At this place, they announced, in Japanese, the meal they were serving as they approached, and then placed the dish on the table with a resounding “Buon Appetito!”

We were well placed for a stroll along the Philosopher’s way, which could easily be reached on foot from our digs. On our way, we passed the Okazaki Shinto Shrine, where the presiding spirit animal is the rabbit. There were a lot of rabbits. 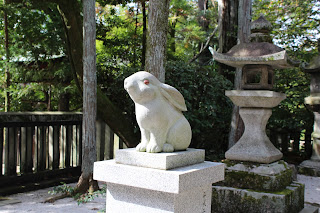 The daily encounter with shrines and temples (shrine: Shinto; temple: Buddhist) was to be a feature of this trip. They are everywhere. But as Prof. Macfarlane tells us, this does not necessarily indicate a devout population. Indeed, as he points out, religious belief is largely a modern phenomenon in Japan, brought about as a reaction to the growth of Western powers. In a fascinating section of his book, he discusses the origins of the renewal of Shintoism: 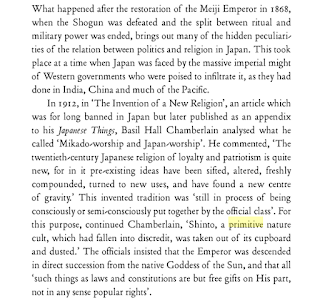 He goes on to point out that the chosen system was given strong support in schools and quickly became part of the cult of Emperor worship that the Japanese had chosen as a kind of counterpart to Christianity. He says: 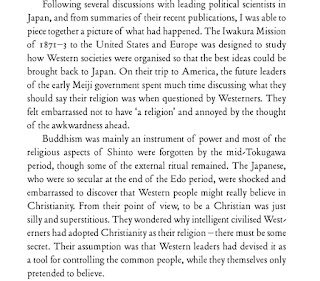 So, whilst there was an ancient tradition which believed in guardian spirits in nature, its modern revival seems to be simply a case of expedience. And now it seems the Japanese use it in the same way some people use superstitious rituals. So if your daughter is taking an exam, you might visit the shrine, and enjoin the spirits to guide her. In a similar fashion, many houses are guarded by this guy: 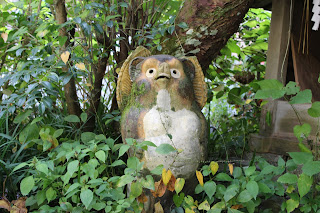 He’s a Tanuki, and you can find more than you really need to know about him here.

Anyway, the temples and shrines are beautiful, and they are there in abundance on the Philosopher’s path, which we travelled along in bright sunshine on a beautiful day. We spent most of the day there, and saw all the major monuments. We also enjoyed browsing around the many handicraft shops that line the paths. Enough for now. More on the Philosopher’s Way in the next Japan post.

Big in Japan 2 by Dr Rob Spence is licensed under a Creative Commons Attribution-ShareAlike 4.0 International License.