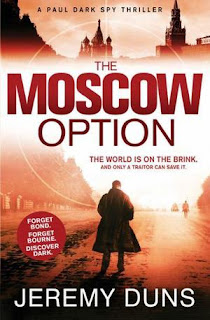 The third volume in Jeremy Duns’s terrific Paul Dark series takes our troubled agent back to the beginning of his career, to meet his nemesis in a scenario where the world is in danger from a possible nuclear war.

I would strongly urge you to read the first two volumes if you haven’t done already – see my review of Free Agent and Song of Treason. The stories stand alone well enough, but are so interlinked that it would be a pity to miss how Duns weaves the various complex strands together over the three volumes. And of course, you get three times the pleasure from discovering how Dark ends up with Sarah Severn in the hands of the Soviets in October1969.

After the Vatican rooftop climax of the previous volume, Dark is now imprisoned in Moscow, but begins to realise, after an encounter with Brezhnev, that a failed operation in which he was involved at the end of the war as a tyro British agent holds the key to the situation which is even now unravelling into a potential nuclear confrontation between the Soviet Union and the USA.

As ever, the odds are stacked against him. He is locked up in Moscow, the prisoner of a repressive regime, and his unlikely story is not going to be believed by his captors. The situation calls for urgent action, and, as is customary in this series, we get it.

Having effected his escape – Duns provides a useful primer on the “Duck and Dive” method of exiting a moving vehicle – the scene is set for a chase across Russia to the Finnish island where Dark had undertaken a perilous mission in the final days of the war.

The narrative moves at breakneck pace, and whilst the reader sometimes has to suspend disbelief – would it have been that easy to track down Donald Maclean, and get him to help? – the plot’s many twists and turns carry you forward to the inevitable showdown.

One of the most satisfying aspects of the Dark series is the way in which the agent’s whole career over twenty-five years hinges on a single decision made at the end of the war. That decision governs everything that happens to him later: its presence is almost Hardy-esque in its ubiquity. And Duns, having carefully planted the relevant clues in the previous volumes, brings the consequences of his action home in a climax that telescopes the cold war into one brutal confrontation on remote Finnish ice.

The story has its roots, as always with Duns, in the documented history of the cold war years, so while the adventures of Paul Dark are (we hope) fiction, the backdrop against which they are played is fact, however incredible it might seem. Duns manages to handle a large cast of real (Brezhnev, Andropov, Maclean)  and fictional characters very adroitly to present an exciting and wholly engaging tale. The background notes he provides are reassuring, especially when some of the detail seems wildly implausible – would you have thought that the allies formed a “committee on dumping” at the end of the war, and disposed of 296,000 tons of captured German chemical weapons, much of it in the Baltic Sea? Me neither, but it’s true.

I have been enthralled by this series, and am now thoroughly enjoying Dun’s latest, of which more soon. Duns has produced a great addition to the espionage genre, informed by a deep knowledge of the cold war years, but which never loses sight of the need to keep those pages turning. Highly recommended.