We said goodbye to Kanazawa, and headed back to Tokyo, where we changed to the suburban train to Fussa, where our friends were living. Fussa is a fairly ordinary place, a city of about 60,000 people west of Tokyo, but with a huge American air force base. And by ‘huge’, I mean really big – about a third of the city. It is, in effect, a small American town in itself, with schools, shopping mall, cinema, sports facilities and all the other conveniences of life in the USA. Our friends, who live outside the base, say some of the military families there never leave the confines.
Fussa is really part of the metropolitan sprawl of Tokyo. As you travel the fifty minutes or so from the capital, you don’t see that much countryside. I suppose it’s not unlike the metroland around London – commuter territory for those who work in the centre.
The presence of the air force base means that there are quite a few US-style diners in town, but you don’t need to go far to find an authentic Japanese environment. It’s a quiet, unassuming sort of place, but a good base for exploring. We had already visited Mount Fuji from here, and we decided to get some more value out of our Japan Rail pass to make a day trip to Kamakura, a seaside town south of Tokyo that was once, in medieval times, the national capital.
On arrival at Kamakura, we hopped on the local streetcar Enoden service, which winds back and forth along the coast, allowing visitors to explore the numerous  temples and shrines that are dotted around.

The old fashioned electric streetcar was a great way to get about, as the day pass allows you to jump on and off whenever you like. We stopped first at Yuigahama, to have a stroll on the beach, where we were pretty much the only people there, except for a young woman who had decided to serenade the sea with her trumpet. 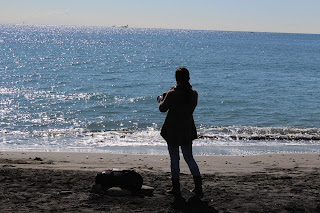 In the far distance, Mount Fuji was just visible on this clear, bright, November morning: 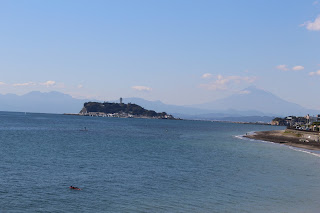 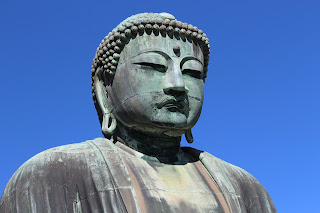 We moved on to our next stop, Hase, where we walked up the hill to the Great Buddha. This is an enormous bronze statue that was cast in 1252, and has remained standing, through earthquakes and fires, whilst the temples built to house it have perished. It’s a popular spot for Japanese and foreign tourists. 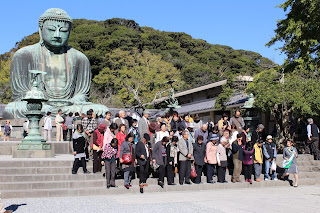 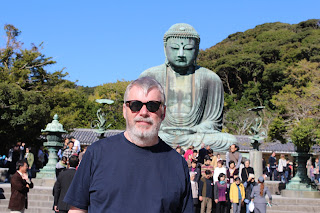 Back in Kamakura, we took a local bus out to the Hokokuji temple, which is remarkable for its bamboo grove. A little path takes you around the temple and into the cool and quiet of the bamboo, and you can also admire the gravel gardens, very like the ones we saw on the Philosopher’s path in Kyoto. In an area we couldn’t access, some caves contained a little army of figurines. 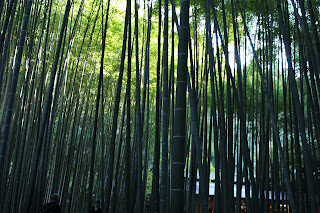 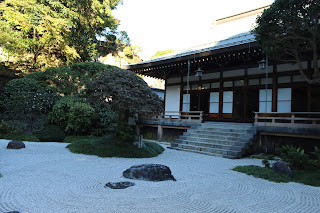 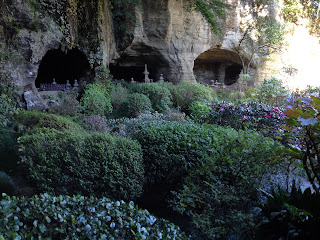 We caught the bus back into central Kamakura, and had time for a stroll around the streets before setting off back to Fussa. This was a lovely, quiet day, supported by the brilliantly efficient Japanese railway system. Kamakura felt very different to the bustle of the big cities we had visited: peaceful, relaxed, with a sandy beach looking out over Sagami Bay. It was just what we needed to prepare for the last few days of the trip, which were going to be back in Tokyo.

Big in Japan 7 by Dr Rob Spence is licensed under a Creative Commons Attribution-ShareAlike 4.0 International License.