William Boyd keeps producing engaging, literate fiction, peopled with believable characters who have interesting stories. I was first aware of him in the early eighties, when I enjoyed his debut novel A Good Man in Africa. This blackly humorous tale of diplomatic disaster in a fictional African republic led to comparisons with Evelyn Waugh, and that was about right: Boyd had that same rather cynically comic detached voice. Since then, he has produced a series of memorable fictions, particularly his two big century-spanning epics, The New Confessions and Any Human Heart,  both of which bear comparison with Anthony Burgess’s masterpiece, Earthly Powers. He has developed a particular line in espionage fiction, too, not only through being selected to write a James Bond novel by the Fleming estate, but through his own original work too. Restless was about the lifelong consequences of involvement in the world of cold-war espionage, a theme also entertainingly explored in Jeremy Duns’s Paul Dark series.  Somehow, Waiting for Sunrise, Boyd’s 2012 novel, set immediately before and during the First World War had passed me by, so I was pleased to find a copy at the excellent Chorlton bookshop the other day. 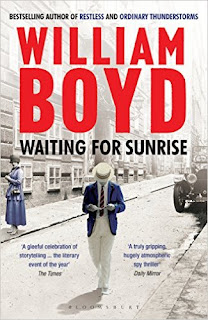 Waiting for Sunrise opens and closes with an anonymous second-person observation of the central character, Lysander Rief, as he goes about his business. This technique places the reader as an observer / voyeur and makes Rief a performer, which is apt: he’s an actor, and will become a secret agent in time. As in Boyd’s other historical fictions, real people intermingle with the fictional, though this is kept to  minimum here. Since we begin in Vienna in 1913, with Rief seeking psychological help for an embarrassing condition, Boyd must have been tempted to enrol his protagonist on Freud’s roster of damaged psyches, but he avoids that, using an English disciple, Dr Bensimon, instead. In the doctor’s waiting room, Rief encounters Hettie Bull, an impulsive and passionate young artist, to whom he is immediately attracted. The  consequences of that meeting will shape Rief’s future, and plunge him into the dangerous world of international espionage. The narrative, apart from those two passages at the beginning and end, is divided between a third person narrator focalised through Rief, and Rief’s own observations, written down in the journal of his thoughts that he advised to keep by Dr Bensimon. The chapters are very brief, for the most part, and given descriptive headings in, I suppose, a deliberately archaic style. The plot advances quickly, as Rief’s love-life leads him into a situation where he is obliged to show his ingenuity in order to escape potential imprisonment in Vienna. Once free, he is doing his duty as a soldier at the outbreak of war, when the call comes to undertake a mission which will expose a mole at the heart of the British war machine. This central section of the plot, which takes place in Geneva, shows Rief as a resourceful and intelligent agent, whose astute appreciation of potential trouble keeps him one step ahead of the game.
But this is far more than a routine historical thriller. The characters and locations are fully realised, with an attention to detail that enables the reader to immerse themselves in pre-war Vienna or wartime Geneva. Boyd uses factual data well for his own narrative means: a Zeppelin raid on London, which hit the Lyceum theatre, for instance, is employed as a way of developing two plot lines, one about the personal life of Rief, and one concerning his suspicions about his mission. I think John Walsh, in his review of the novel in the Independent, hits the nail on the head: “He whizzes the story along…but lingers over evocations of people and buildings, so we feel we know their texture even as the plot gallops along.”
In genre fiction –and this is far more than a genre piece– a common failing is to make characters mere servants of the plot, forgettable and two-dimensional. The reverse is true here, from Rief, who has an actorly self-regard that manifests itself at inopportune moments, to his tough explorer uncle, who is unexpectedly and tenderly gay (did you know that ‘musical’ was an Edwardian code word for gay?) to Wolfram, the Slovene hussar with whom Rief shares lodgings, and whose technique for avoiding suspicion in a grubby regimental case of petty thievery gives Rief an insight much later in the narrative. And indeed, it is noticeable how, even in passages that seem to be local colour or background, details are embedded that will later prove significant. One lovely motif was the incidental snatches of Rief’s poetry from his notebook, which start in sub-Edward Thomas mode, and develop into a voice not unlike Eliot’s in The Waste Land.
So, I can’t recommend this highly enough. Boyd holds the reader’s attention through a complex plot, where often the reader’s, and Rief’s first impressions turn out to be wrong, and evokes the world of a century ago with verve and panache. Brilliant.