We loved our trip to Japan, and had a wonderful time exploring its culture, history and geography. But like Prof. Macfarlane (remember him?) we felt that we had merely managed to skim the surface of the country, and that that we could spend a lifetime trying to truly understand it. We discussed this in Hiroshima, with someone who had lived there for twenty years, and he confirmed that feeling at home in Japan is a very elusive thing for a foreigner.

That shouldn’t put anyone off, however, so I thought I would offer some of our insights, in no particular order, aimed at the potential traveller to Japan.

1. Travel at least once on the Shinkansen. It is a wonderfully relaxing way to get from A to B. The Japan Rail Pass is a bargain, and if you intend to move around on your holiday, it’s essential. 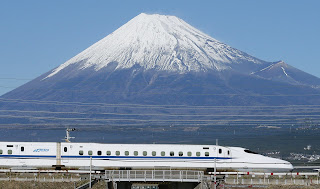 2. Be prepared for some surprising experiences when you go to the loo. In hotels and restaurants, you will often find an all-singing and all-dancing loo with switches for various types of warming or cooling bidet-style water jets, and music or birdsong to accompany your actions. Like this:

3. Don’t worry if you are vegetarian. We imagined that we would struggle, but certainly in the cities there are loads of ethnic restaurants that are fine for veggies, especially Italian. And of course, in Hiroshima, there’s the possibility of a vegetarian okonomiyaki. One possibility we had considered before travelling was to eat at the temples, where you can sometimes get vegan food from the kitchen. Once in Japan, we found that the temples are now quite chic destinations for foodies, and that the kitchens are not open to the public that often, and the prices are sky-high.

4. Try to use some Japanese, even if it’s only “Hello” and “Thank you.” The people will really appreciate that you made some kind of effort. English isn’t spoken that widely, but we found that in the cities at least, most people had some basic English vocabulary.

5. Bow. On greeting people, and leaving them, or when some sort of transaction is going on, like a shop purchase or a hotel check-in, bow. It becomes a habit, and it’s a little acknowledgement of the more formal way of doing things in Japan.

6. Be prepared to be ordered about, very gently, by people you come across. Japan’s economic culture encourages long-term employment security above short-term economic gain, so people are employed in functions which would not be seen as necessary in England. For example, we often saw a smartly uniformed man or woman at the entrance to multi-storey car parks. Their job was to usher in the cars as they approached, and to hold up pedestrians who were crossing in front. Another instance was in hotels, where, rather than allowing the customer to approach the reception desk on their own, a group of employees would intercept you, and direct you to the right counter. A similar process obtained at the Japan Rail office at the airport, as I mentioned. This is related to their love of paperwork and bureaucracy. You will get receipts for everything.

7. Use the Metro to travel around Tokyo. Tickets are cheap, the network is extensive, and if you avoid the obvious rush hours, the trains don’t get too crowded. We never saw anything like this:

8. It’s not as expensive as you might think. Because the Japanese economy has been stagnating for so long, prices are actually pretty reasonable from an English perspective. We paid no more for food and services than we would pay at home – maybe London prices in Tokyo, but nothing ridiculously expensive.

9. It’s safe. People can walk around late at night without fear. Street crime is very rare. Obviously, it’s sensible to take precautions, but we never felt the edginess that you get in British cities at night.

These Japan posts have, I hope, been of interest to my reader, but they’ve also helped me to process the experience, and to relive some great moments. We have very fond memories of our trip.

Big in Japan 10 by Dr Rob Spence is licensed under a Creative Commons Attribution-ShareAlike 4.0 International License.