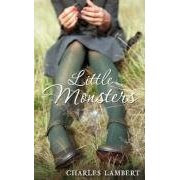 I suppose the way I encountered Charles Lambert’s excellent debut novel Little Monsters is emblematic of how the interweb works these days. I hadn’t read a review, despite my voracious appetite for the book pages of the proper papers, but came across Charles’s engaging blog, which in turn led to some correspondence. The upshot is, I have had the privilege of reading a brilliant novel, and now Charles has very kindly agreed to a kind of long distance Q and A session, which I will be including in the new e-journal I am co-editing at Edge Hill. As we speak, Charles is eating pork pies in Wolverhampton, apparently, but when he returns to his lovely home in Italy, I hope to do the email interview. With luck, that will be available in September via Edge Hill’s web site.
The novel is a study of damaged people, but also touches on the possibilities of human renewal in the face of what used to be called man’s inhumanity to man. The opening sentence has already lodged itself in my consciousness as one of the most startling and arresting I’ve read: “When I was thirteen my father killed my mother.” I still think Burgess’s opening line in Earthly Powers is my favourite, but this is now a high new entry on the chart.
The central character and narrator, Carol, deals with the traumatic events of her childhood, and her exile to the loveless home of her aunt, by reinventing herself. The narrative switches from the memories of an adolescence growing up in the pub owned by her aunt and her Polish refugee husband in the sixties, to the contemporary setting of the camp for asylum seekers in Italy where the present day Carol works. Lambert’s prose is delicate and nuanced, and one of the delights of the novel is seeing how each narrative strand informs the other, through the repetition and variation of images and references. I was particularly struck by the use of what pompous academics would call tropes of flight, used by the author to link the strands and the characters. It is a beautifully realised novel, and one which manages to deal with very big issues on a human scale. I loved it.
Charles writes about it here, and there are reviews by John Self here and Scott Pack here. Oh, and now I know what Pokemon means, so it’s educational too…