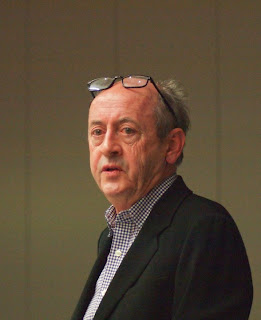 Last night I had the good fortune to meet Billy Collins after he had performed at Edge Hill’s Poets Laureate event with Carol Ann Duffy.
As my students know, American Literature is a bit of a blind spot with me, but I have been a fan of Collins since first hearing him read on Garrison Keillor’s Prairie Home Companion. His poetry is wry, funny, thought-provoking, and accessible. Its deceptive simplicity is its strong suit. Collins observes life and re-presents it to his reader with gentle irony and wit. Its art lies very much in its seeming lack of art.

My friend and colleague Daniele Pantano was instrumental in bringing Collins over, and he did not disappoint. Together with Carol Ann Duffy, he provided a memorable evening’s entertainment. Duffy was sharp, sour, rather angry at times (she self-deprecatingly referred to herself as ‘Disgusted of Didsbury’ at one point) and showcased some new work, alongside old favourites from The World’s Wife.
Collins read some new poems too, but also delighted with a reading of ‘Forgetfulness’, quirkily interpreted in this video:

Thanks to my friend Tim Power who took the photograph which captures brilliantly Collins’s air of slight bemusement. I’m told video of the event will soon be on the EHU website – do have a look.

Housekeeping- Apture should now be enabled across the blog, so anything that takes your fancy, highlight, and you’ll get some links.