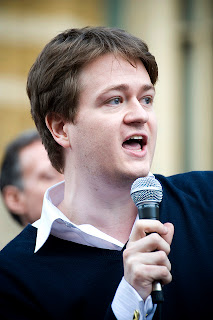 I began writing this post before the news broke today that Johann Hari had been suspended by The Independent, so much of what I was going to write is redundant now – read the Guardian article for the details.  I have been a fan of Johann Hari for some time. I liked his style, and that he seemed an individual in a sea of identikit rent-a-gob commentators. I sometimes disagreed with him, but always found his articles lively and entertaining. Then the news that he routinely passed off quotations from books as quotes he had obtained in interviews appeared, and he immediately lost some credibility. That was compounded by his initial denial that this was wrong.
That was bad enough, and then, a couple of days ago, Nick Cohen wrote a blistering piece on Hari, characterising him as a vindictive and deceitful prat. Then a  tweet by David Allen Green, alias Jack of Kent, suggested that there was something even murkier about Mr Hari. Green wrote this, which confirmed that the Orwell Prize winning author seemed to be at the very least condoning some juvenile and nasty behaviour.  This evening, Green said that he now knew the identity of “David Rose”, but was not going to reveal it, for fear of triggering an expensive libel action.
It’s a sorry tale, and you wonder if Hari can recover from it. I can’t imagine taking one of his columns at face value again.
Update: and, according to Guido Fawkes, even his Orwell piece was nicked.
Update 20th July: Hari has taken his website down completely.
Update 21st July: Hari is accused of more dishonesty here.
Update 26th July: Hari has broken his silence to say he’s been instructed by the Indy not to say anything until the outcome of their investigation. Meanwhile, the Orwell prize committee all but confirm he’s to be stripped of the prize.

Feet of Clay by Dr Rob Spence is licensed under a Creative Commons Attribution-ShareAlike 4.0 International License.

Fartlek with Laura
Feet of Clay (2)