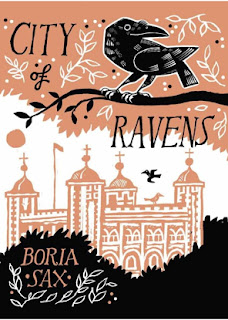 To Cromford, in the Peak district, largely to visit the excellent Scarthin Books, a rambling, old-fashioned second-hand bookshop, crammed with bibliographic treasure, and a very pleasant café to boot. Acting on instructions from ‘er indoors, and taking account of the overcrowded bookcases Chez Topsy, we emerged with just one book – City of Ravens by Boria Sax. This Sax cove is well-represented in the home library, since his books are usually about the representation of animals in literature, particularly European, an area of scholarly interest to she-who-must-be-obeyed. Isn’t Boria Sax a great name for a scholar? It exudes a kind of mittel-Europa or Bohemian sensibility, I think. I wonder if he is a relative of the inventor of what Homer Simpson calls the Saxomophone?

This little book is a fascinating account of the ways in which birds of the corvidae family are associated with omens, prophecies and other dark doings. Sax’s account  of the legend of the ravens of the Tower of London, which forms a kind of centrepiece in this short book, is fascinating. I – and you, I suspect, dear reader – always assumed that the legend that England would fall if the ravens disappeared from the tower was one steeped in antiquity. Sax, however, puzzled that he could find no reference to the ravens in medieval or seventeenth-century literature, and maintaining a scholarly scepticism to the non-footnoted official guide, discovered that the birds were actually introduced in the late nineteenth century, and that the “legend” dates from as recently as the Second World War, when, in the Blitz, England might well have fallen.

This startling nugget is one of many in a volume that ranges from Anglo-Saxon to the present day, referring one moment to The Mabinogion and the next to James Joyce, by way of Harrison Ainsworth and Claude Lévi-Strauss. The book is academic, in that there is an extensive bibliography, and it is clearly a work of painstaking scholarship, but it is not dry; Sax is happy to add a personal touch, and to write in an accessible and sometimes humorous way. His career has not been that of a conventional academic, as his quirky website confirms, but his books on the area of animals in literature and mythology are authoritative. This lovely little book is a great addition to his canon.

City of Ravens by Dr Rob Spence is licensed under a Creative Commons Attribution-ShareAlike 4.0 International License.