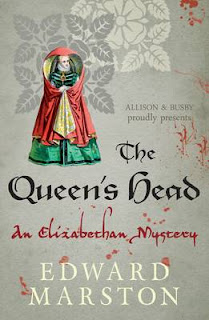 I came across Edward Marston, a  new-to-me author the other day, and was impressed enough by his prolificity to have a go at one of his period detective stories. Marston has published over forty detective novels, all historical, as befits someone whose background is as a historian. What attracted me particularly to The Queen’s Head was that it was the first of a series set in Elizabethan London, with the central figures all members of a fictitious actors’ company. The combination of the historical period and the theatrical setting sold me, and I was not disappointed.
Our protagonist is Nick Bracewell, the book holder of the Earl of Westfield’s Men, and the setting is immediately after the defeat of the Armada. After an opening vignette describing in gruesome detail the execution of Mary Queen of Scots, the action centres around the search for the killer of one of Bracewell’s actor colleagues. The execution scene, seemingly unrelated to the main plot, does have resonance later.
Bracewell is a likeable detective figure. Modest and unassuming, he is the key member of the company, holding the one complete copy of the play text, calling the scene changes, organising the stage hands, arbitrating between disputing players, and keeping the vanities of the Brian Blessed-like principal actor, Laurence Firethorn, in check. He was on Drake’s circumnavigation, but apart from that, his life before joining the players is a mystery, to which even his landlady / lover is not privy.   There was an air of Elizabethan Theatre 101 about some of the scene-setting sections, but I am hoping that this is because it’s the first of the series. Clearly Marston (a good name for a writer on Elizabethan theatre) is a man who has immersed himself in the period. What’s more, he once ran his own theatrical company, so he writes from experience.
This is undemanding fare, but pleasant to read. Marston manages to make his dialogue seem authentic without any excessive fol-de-rollery. The outcome was not entirely a surprise, but the climactic scene is a tour-de-force, as danger stalks the company’s performance at court.
I see the series in now up to number 16, so I’m way behind. Onwards to the next volume.

The Queen’s Head by Dr Rob Spence is licensed under a Creative Commons Attribution-ShareAlike 4.0 International License.

Exterminate All The Brutes
The Merry Devils