The Trip to Jerusalem 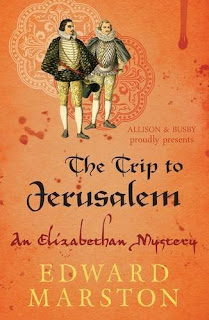 I’m tempted to use “the mixture as before” for the third successive post. This is the next story in the Bracewell mysteries, and all the familiar ingredients are there: dastardly acts of sabotage by the Earl of Banbury’s Men; a player who is not what he seems; the abduction of one of the boy-players; marital problems for Lawrence Firethorn; bloody scenes of torture and death. But then, the genre is formulaic, and Edward Marston has honed his technique well. And to be fair, there are some unusual elements to this tale of Lord Westfield’s Men. The plague has forced the players out of London, and the action takes place in a series of provincial locales, ending up at York, where, according to this novel, the pub called the Trip to Jerusalem was to be found. I remember going to the Nottingham Trip, so I was puzzled by this substitution, especially as some of the action takes place in Nottingham, where Firethorn pleases the locals by giving them his Robin Hood.  Extensive research (well, I googled it) suggests there was no Trip to Jerusalem pub in York, and actually, Marston’s pub now has a new name since it was taken over by Sir Clarence Marmion.
Bracewell is his usual resourceful self, saving the company from disaster, and bringing a plot that involves recusant Catholics, gay spies and a mad woman to a satisfactory conclusion. Still enjoying the series, and looking forward to where a capricious fate will take him and the company next.

The Trip to Jerusalem by Dr Rob Spence is licensed under a Creative Commons Attribution-ShareAlike 4.0 International License.