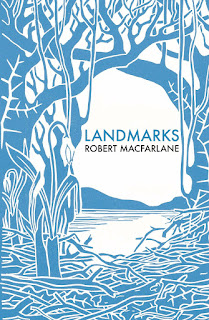 I am very grateful to my friend and former colleague Kym for the gift of this brilliant book. Robert Macfarlane is one of those sickeningly talented renaissance men, who can, in his case, maintain a high-profile academic career at Cambridge, and produce a series of startlingly original books, while filling in his spare time with such activities as writing opera librettos, making TV documentaries and chairing the Booker Prize committee. Not that I’m envious, you understand.

Landmarks  is an unusual book, in that its avowed subject is the examination of the language we use to describe landscape, but it is about as far from a dry academic tome as you are likely to get. Macfarlane combines his interest in the countryside, and the way in which writers have represented it, with a fascinating exploration of the evocative language, often dialect, used to describe particular conditions. He adopts an innovative format to present his ideas: the book is divided into chapters which focus on some of his favourite nature writers, and examine both their work and the landscapes in which they are situated; then, after each chapter, is a glossary themed around a particular aspect of nature – Flatlands, Uplands, Waterlands and so on. The glossaries are eclectic, with items drawn not just from the writers he considers, but from the folk tradition and from literature.

The great landscape writers under consideration here are not the obvious ones, or at least, not to me. Indeed, some of them were completely new names as far as I was concerned. One such is Nan Shepherd, whose book about her life in the Cairngorms. The Living Mountain, was written in the forties, but not published until 1977, a few years before her death. Shepherd seems to be one of those fiercely independent women of the late Victorian era – she was born in 1893 – who forged their own life, irrespective of society’s expectations. She was, I learn, a writer of modernist fiction – but not one who figures in any of the standard accounts with which I’m familiar – whose novels are clearly autobiographical and might, on first glance, bear some comparison with Dorothy Richardson’s Pilgrimage sequence.

(Image: By Graham Lewis (The Cairngorms) [CC BY 2.0 (http://creativecommons.org/licenses/by/2.0)], via Wikimedia Commons)

But it is her nature writing that attracts Macfarlane’s attention here. In this early chapter, he establishes a principle which holds both for the writers he discusses, and his own work: the importance of precision. In their different ways, all of the writers Macfarlane presents exemplify that principle in their work – they observe the world around them in minute detail, and are sensitive to tiny changes in its fabric. It’s all about attention – Macfarlane and the others attend to the landscapes they encounter, and reflect on significances that would escape the casual observer. I was reminded more than once when reading this book of Sherlock Holmes’s terse comment: “You see, Watson, but you do not observe.” Macfarlane and his heroes are the Holmeses of nature writing, and we are the Watsons. Macfarlane recounts a moment on a climb in the mountains where he is reminded of a passage in Shepherd’s book where she describes the sound of moving water:

One hears it without listening as one breathes without thinking. But to a listening ear the sound disintegrates into many different notes – the slow slap of a loch, the high clear trill of a rivulet, the roar of spate. On one short stretch of burn one may distinguish a dozen different notes at once.

Macfarlane goes on to show the same kind of attention to detail he sees in Shepherd, and weaves a personal story of his own encounters with the Cairngorms around an astute and sympathetic account of Shepherd’s writing.

Other writers on show here include the curious figure of J.A. Baker, whose book The Peregrine I read, I now realise, just after it was published in 1967.  Baker, an amateur, and disabled, pursued the peregrines he saw hovering over the Essex marshes with a determination bordering on the obsessive. His book, which distilled a decade’s worth of observations into a year in the life of the bird, is almost his only monument. Macfarlane writes about the newly opened archive of Baker material at Essex university, and speculates on the nature of the man revealed in the journals kept there.

Other writers considered by Macfarlane include the unexpected (Jacquetta Hawkes) and the obscure (Richard Skelton) but each more than justifies their place as their contribution to the rich language of landscape is explored. I was intrigued to be introduced to these writers, and delighted that Macfarlane has also added a bibliography of relevant works to follow up on. The TBR pile grows again…

The glossaries are a separate joy in this book. It’s good to be reminded of the inventiveness of Hopkins (endragoned – a raging sea) , but even better to discover some of the evocative words for landscape collected by Macfarlane from a variety of sources. He tends to favour some geographical areas over others – lots from Shetland, none from Orkney, lots of Celtic – Cornish, Breton, Welsh, Gaelic – but not much from the eastern side of England, though there are a few glorious words from the north-east miners’ Pitmatical slang dialect (canch: the stone above or below the seam that has to be removed to get at the coal) and from more exotic sources, such as the Anglo-Romani word for Yarmouth, matchkani gav, literally “fish-village.”

At the end of the book, Macfarlane reveals that he has been contacted by a scholar who had been working for fifteen years on a global glossary of landscape words. The scope of this enterprise can be imagined when one considers that “B” section alone, beginning with ba the Akkadian for water, of the Topoglossary comes to 343 pages. So – lots more to be done, and read and recorded. This jewel of a book is one I’ll return to, I’m sure, and it’s opened up a treasure trove of further reading, which will take some time to compass.

A Word Hoard by Dr Rob Spence is licensed under a Creative Commons Attribution-ShareAlike 4.0 International License.