A Thousand Days in Tuscany by Marlena de Blasi 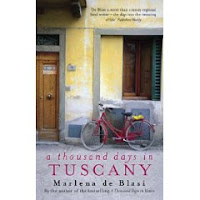 This is not the sort of book I would usually read, but since I was going to be in Tuscany for seven days, I thought it seemed an appropriate travelling companion. Evidently, it’s a sequel to her A Thousand Days in Venice, and there are other volumes on Umbria and Sicily- so you can see a pattern, no? In the Venice volume, this American-Italian gourmet journalist of a certain age meets, falls in love with, and marries Fernando, a Venetian banker. The sequel chronicles their new life in a Tuscan village. It’s a romanticised version of Tuscany, to be sure, and the heavy emphasis on the food of the region contributes to the production of a bucolic utopia only occasionally darkened by the intrusions of modern life.
Having made a leap into the dark by deciding to forge a new life in Tuscany, the couple immediately become the gastronomic heart and soul of the village, a fixture at the Bar Centrale, and enthusiastic preservers and revivers of old Tuscan customs. Their main ally in this project is a kind of village elder called Barlazzo whose knowledge is apparently infinite- he becomes their guide.
It’s an entertaining journey, following the rustic rituals of the calendar, interspersed with recipes that, to this vegetarian seem somewhat long on preparation and short on consumption. My favourite was a leg of pork marinaded in three bottles of wine and cooked over seven days in a specially built outdoor oven. Life’s too short.
The author, clearly a somewhat head-in-clouds romantic, veers off from her account of the ways of the Tuscan peasant occasionally to indulge in the kind of soul searching often to be found in those “follow your dream” life coaching manuals beloved of Americans. These passages are rather cloying, but they are compensated for by the pervasive presence of Barlazzo, for me the hero of this book. It is his dark secret that provides a teasing thread through the narrative.
Barlazzo’s status as the village chieftain (de Blasi calls him ‘the duke’) is undisputed, and he is at the heart of every culinary activity. He also provides the historical and cultural context in not entirely credible style when, for no apparent reason, he decides to recount the history of Tuscany in guide book fashion. These sections are clunky, and although the context is useful, I don’t see why de Blasi couldn’t have told us in her own voice.
The book is published here by Virago, once fiercely feminist but now just another imprint of the giant Hachette empire. The text is, as is the way of things these days, resolutely American, so the usual linguistic differences occur- rigor, clamor, practicing, fall and so on. Less acceptable, it seems to me, is the use of ‘sharecroppers’ for the Tuscan tenant farmers, and ‘unphased’ for ‘unfazed’. 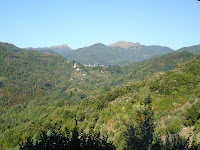 It’s an enjoyable read, especially if, like I did, you read it whilst gazing out over a beautiful Tuscan valley as pictured above. It’s educational too, as even herbivores are provided with some useful recipes. And now I can pronounce ‘bruschetta’ correctly.

A Thousand Days in Tuscany by Marlena de Blasi by Dr Rob Spence is licensed under a Creative Commons Attribution-ShareAlike 4.0 International License.