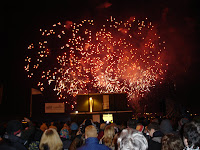 To Liverpool, for the Transition. My reader will recall that my views about Liverpool and its status as Capital of Culture were formed in the days when a new disaster was announced every hour on the hour, and the whole thing seemed an absolute joke. Well, time to eat my words, because, in the hands of Phil Redmond, a laughing stock was turned into a fantastic success.
There’s still a tendency in Liverpool to trade on the past – come on, the Beatles split forty years ago- and a habit of trotting out the cliches about how everybody in the city has a marvellous sense of humour and community spirit – especially, and paradoxically, when something awful, such as the murder of a child, has happened. Boris Johnson, who was lampooned in the presentation, had to apologise for offending Liverpool’s delicate sensibilities by using the “victim culture” stereotype- but at the time, Liverpudlians just subscribed to another stereotype.
Someone who had a similar experience to mine is the estimable Lynsey Hanley, who also mentions that bizarre phenomenon of the outdoor pyjama-wearer, but in a serious context. I noticed on my last visit to Liverpool that peculiar juxtaposition of dereliction and prosperity that she comments upon.
The transition night was great fun.

Big screens at the Pier Head showed a fast-changing collage of the year’s events to the accompaniment of a soundtrack that cleverly referenced everything from Sgt Pepper to the La’s (always hated that apostrophe) though, of course, Lennon’s dreadful Imagine dirge had to be in the mix. It was all narrated by a bizarre disembodied Roger McGough head.

The official handover was done to the Lord Mayors of Linz and Vilnius- no speeches, as the thumping soundtrack was still going. (By the way, when did we finally crack the problem of public address systems, which, by definition, were always inaudible? At Liverpool, and in train stations, and football stadia, it’s crystal clear now). Then a huge firework display – the best I’ve ever seen, and then 30,000 people went off to roam the streets, shop, visit art galleries and museums, and generally have fun. We had a brief visit to a very crowded Tate, where we had a glimpse of Blake’s work, an even briefer visit to an even more crowded Bluecoat, and finished with an excellent pint or two at the Lion, before taking the train back to where we were staying (thanks for a great night out and, as usual, marvellous hospitality, Robert and Christine)