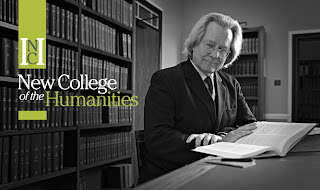 A.C. Grayling’s pieces on moral dilemmas in The Guardian (later collected into various books) always impressed me. Witty, erudite, elegant, they anatomised the modern ethical landscape, and presented solutions that were often informed by references to classical literature. Grayling has had his detractors as a so-called media don, but it always seemed to me that you don’t get to be a media don without some reputation to start with. Schama, Starkey and the rest became TV personalities because they were serious academics with prestigious positions, not the other way round.
Grayling would be an obvious champion of the humanities at a time when they are under threat in the academy.  So it was not a surprise that he should be the figurehead behind the launch of a new educational institution, the New College for the Humanities, dedicated to, as Grayling says on the website, “personal enrichment, intellectual training, breadth of vision, and the well-informed, sharply questioning cast of mind needed for success in this complex and competitive world.” Well, that’s just great, and many of us in the humanities would love to work for an institution with that as a mission statement.
But here’s the rub. Elsewhere, Grayling asserts that “We’re open to anybody who has talent and ability.” Well, up to a point, Lord Copper. The standard fee for the NCH will be a whopping £18,000 a year, meaning that it is out of reach for all but a tiny minority. Given the promises that Grayling is making, the fees might be justified in some people’s eyes: stellar academics (Dawkins, Pinker, Ricks et al) supported by a dedicated teaching staff unencumbered by admin duties, who will offer small group and one-to-one tuition. Marvellous. But that £18k fee, despite some suggestions that some students will have the fee waived, remains a huge barrier.  I’m reminded of the well-worn quip of  Justice Mathews – ‘In England, justice is open to all – like the Ritz Hotel.’
What makes the enterprise (and that’s clearly what it is) smack even more of opportunism is that perforce, since the NCH isn’t an accredited university, study will lead to a University of London award, and students will use  London facilities. Even the course materials have been lifted wholesale, as Amanda Vickery, and a number of others pointed out. As Vickery said on Twitter “NCH thinks my 18th-century women course worth £18k. Come & have it @QMUL for half that, & taught by Prof who designed it.” Moreover, it transpires that the “Professoriate” of big name dons might teach for as little as one hour per year.
It’s difficult to see what NCH can offer, other than an alternative route into a prestigious degree for the rich who don’t manage a place at Oxbridge.  The NCH, if it were to charge low fees, or use sponsorship to offer humanities degrees to the brightest, would be a noble enterprise. As it stands, though, it is, in its way, simply another example of the commercialisation of HE in this country.

Feet of Clay (2) by Dr Rob Spence is licensed under a Creative Commons Attribution-ShareAlike 4.0 International License.