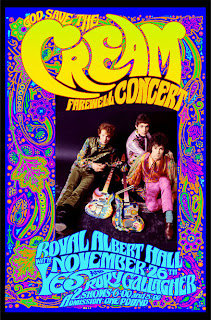 I spotted this poster whilst enjoying an excellent Warsteiner at Mary and Archie’s yesterday. I took a picture on my rather basic phone, which is rubbish, so I found a better version here.  It’s a poster for Cream’s farewell gig, at the Royal Albert Hall, in November 1968. It’s fascinating for several reasons. The groovy outfits sported by Baker, Bruce and Clapton are, even at the distance of 42 years, startling, but you might be able to make out that there were two shows, at 6.00 and 8.00, and that there were two support acts, Yes and Rory Gallagher. And that tickets were a whole pound.  I’ve been trying to think what a pound would buy back then – I was just 14 when they played this concert. According to this site, it would be about £12.90 in today’s money. So, quite a lot to a 14 year old, but not a fortune, to see arguably the top rock group in the world at the time, together with another huge act, and a highly regarded third act. What would it be today – U2 supported by Coldplay and Rufus Wainwright, perhaps?
They played two sets, separated by just two hours, so presumably, Cream can’t have played more than 45 minutes, and maybe Yes half an hour (one song for them) and Gallagher perhaps twenty minutes. One creepy reflection: Clapton is, of course, still going strong, as are Bruce and Baker. Rory Gallagher died years ago, but who would have thought in 1968 that, with dozens of line-up changes, there’d still be an entity called Yes, still touring and making what we used to call LPs, over four decades later? This rather disturbing publicity shot of the current band, featuring three very long serving members, shows that there are no strange portraits in anyone’s attic. 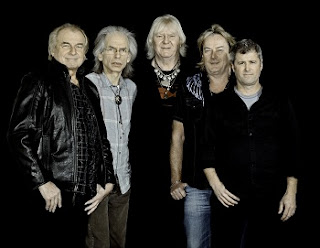 Far out, man. by Dr Rob Spence is licensed under a Creative Commons Attribution-ShareAlike 4.0 International License.