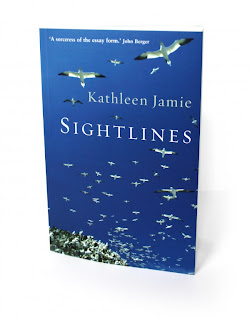 To the Burgess to see Kathleen Jamie talk about her new book of essays, Sightlines. I have long admired Jamie’s poetry, but in the essay form, I think she has found her true métier. The previous volume of short prose pieces, Findings, was a delight from start to finish: Sightlines is better. Both titles give a clue as to what is contained within – these are essays of observation and reflection, mostly, but not completely, of the natural world. What strikes the reader is the originality of the observations, particularly of the relatively mundane. She has a knack of seeing things from a startlingly original perspective, and she is able to communicate that vision in clear, sinuous language that delights and entertains.
The launch event was well-attended, and was set up, rather awkwardly I thought, as an interview with readings. Early on, though, Kathleen Jamie took control, and the questions became more like prompts for the next passage to be read. The scope of this, as with the previous volume, is wide. As well as the treatment of landscape, particularly of her native Scotland, the book chronicles Jamie’s investigation into the strange landscapes of cell biology seen through a hospital microscope, the Aurora Borealis, and the sight of a group of killer whales on the hunt.
She announced before the first reading that her journey to Greenland, detailed in the first essay in the book, was occasioned by a carpe diem realisation that she had reached middle age without seeing an iceberg. Her account of the journey takes in both the natural beauty of the land- and seascape, as well as the trials of a rough sea voyage. She reads with great clarity – not always the case when authors read their own work – and evokes the scenes she describes effortlessly.
The final reading was the dramatic account of the sight of killer whales off the coast of Rona, the island forty miles of the coast of Scotland, once inhabited, but now deserted, like St Kilda. In this essay, Jamie moves seamlessly from the ominous description of the whales’ arrival to the almost slapstick scene where the members of the groups she is with run around the headland chasing the whales as they hug the coastline below in search of prey.
The book is a delight, the photographs complementing the vivid writing. Each essay leaves the reader feeling that something has been illuminated in a rare and poetic way. This will sit on my shelf next to George Mackay Brown, than which I have no higher praise.

Ways of Seeing by Dr Rob Spence is licensed under a Creative Commons Attribution-ShareAlike 4.0 International License.