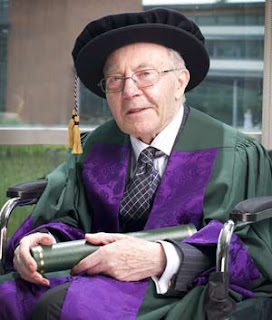 Yesterday was graduation day at Edge Hill for students in my department. It was great to see them all together, in their academic robes, and to be part of the ceremony.  This year’s ceremony was different to most, in that we awarded an honorary degree to Mayer Hersh. As a survivor of Auschwitz, he would be remarkable by any standards. That he has dedicated the latter half of his life to educating people about the Holocaust, particularly through the Holocaust Educational Trust. makes him even more so. My colleague Prof Kevern Verney made the presentation, and Mr Hersh then made a very moving and and thought-provoking response, in which he recounted his experiences.The ceremony can be viewed here, and an interview is available here.
To be in his presence as he recounted how his life changed irrevocably when Germany invaded Poland the day after his thirteenth birthday, was a privilege. Many in the audience were moved to tears by his speech, at the end of which he received a standing ovation, something I’ve never witnessed at a graduation ceremony.
Too often, universities give honorary degrees to people because they are celebrities. In this case, we honoured a truly worthy figure, who, in the face of unimaginable cruelty, had dedicated his life to fighting prejudice. Never forget.