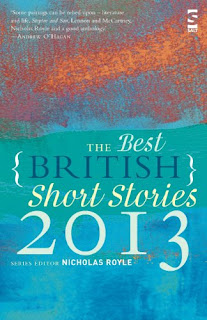 Thanks to Salt for sending me this collection, the latest eclectic volume in their series. It’s very much the mixture as before, with well-established authors rubbing shoulders with newer names, with stories garnered from a variety of sources, from the august (Granta, The Edinburgh Review) to the obscure (Willesden Herald New Short Stories 6) and with some having previously been published online only. The selection, by editor Nicholas Royle, delights by its variety and its juxtaposition of the nightmarish and the mundane. Royle’s entertaining introduction starts with a lively rant at the concept of flash fiction, and then goes on to examine the state of the short story in Britain today, which, it seems, is in rude health.

The collection offers stories by leading authors such as Jackie Kay, Adam Lively, Robert Shearman and Lesley Glaister. More intriguingly, the volume features some writers new to me, whose profile will benefit from the exposure gained by being alongside those familiar names. Regi Claire’s ‘The Tasting’ is an unsettling, somewhat surreal tale in which a woman is led into a dangerous game that threatens her being and her sanity; in Nikesh Shukla’s ‘Canute’ a man escapes briefly from his life as a software engineer to lose control as he hunts for sea-bass; Charles Lambert’s ‘Curtains’ explores the devastatingly destructive psychological effects of abortion on a couple; Laura Del-Rivo’s ‘J Krissmann in the Park’ is a strange vignette in which an oddly obsessive old man filters the everyday world through his fractured consciousness. There is no overall theme, other than excellence, to the collection, but time and again, one senses a kind of Verfremdungseffekt – that sense by which the familiar is made strange.

This is an ideal bedside book, offering immediate gratification for the reader in these often very short (but not flash) stories, great for dipping into. It’s well-produced, too, and includes author biographies, often highlighting the quirkier aspects of the writers’ lives: Laura Del-Rivo, whose first novel was filmed by Michael Winner fifty years ago, “lives in Notting Hill and runs a stall on Portobello market.” She sounds like a character from Penelope Fitzgerald.

This volume, like the previous ones in the series, is highly recommended, and Salt are to be congratulated for promoting the continuing development of the short story in this country. And thanks too to Nicholas Royle, whose voracious reading allowed him to identify these gems.

The Merry Devils
The Trip to Jerusalem