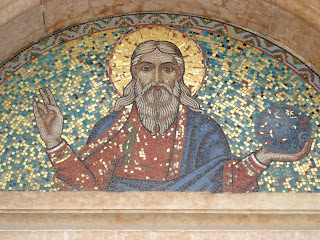 To Venice, with ‘er indoors. Both of us were experiencing The Serenissima for the first time. The new image at the top of the blog is a photograph taken from the Rialto bridge, and it, like so many other photos we took, is eerily reminiscent of a Canaletto painting. And that’s the thing with Venice – it oozes history at every turn. The first thing we did when we got back was to begin planning our next trip. So – what is it that makes Venice the destination of choice for sophisticated travellers like what we are?
A colleague of mine who went to Venice a couple of years ago reported meeting a couple of English people who had been on a day trip. They didn’t like it: “Just like Blackpool,” they said. I lived near Blackpool for seventeen years, and don’t recall its abundance of Renaissance palaces, its churches stuffed with priceless works of art, its gondolas… It seems that they hadn’t got much further than the Piazzale Roma, which is, it has to be said, an unlovely bus depot enlivened only by a scattering of souvenir stalls selling cheap made-in-China tat. Even so, I’d prefer it to the Golden Mile, if only because it leads to the treasures of this sublime city. Venice has twenty million visitors a year, and less than half of them stay overnight. So it’s no surprise that the Piazza San Marco and the Rialto bridge were, even out of the main holiday season, packed with camera-clicking hordes. They might only have a few hours in the city, so they were going to prove they were there by taking as many photos as possible against iconic backdrops. When we first started exploring, this was annoying, but it soon became apparent that when you moved away from the honeypot sites, the rest of the place was, whilst often busy, surprisingly easy to move around. We walked everywhere – the vaporetti are expensive, with a single trip at €6,50, and usually we could walk where we wanted much quicker anyway. We did splash out on a 36 hour ticket to visit the outlying islands, and that was well worth it.
So, armed with the wit and wisdom of J.G. Links’s lovely book Venice for Pleasure, (thanks to the Coopers for the tip) we followed his suggestions and walked around each district. We stayed in an apartment in the Cannareggio district, which was very handy for the Ghetto and Madonna dell’Orto, both well worth a visit. Even staying in that area, away from the main tourist trail, we found that a fifteen-minute stroll would land us pretty well anywhere we wanted to be. It’s such a compact place, so, with (obviously) no traffic, it’s ideal for walking.

After a while, we began to enjoy the unsung corners of the place – a quiet fondamenta, a local campo – as much as the gorgeous excesses of the churches and palaces. 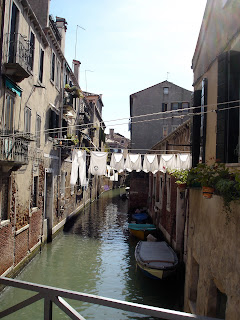 But it is the art and architecture that astonishes, and we did explore it at length. If our top tourist tip is to walk everywhere, our second is to buy a Chorus pass. This entitles you to one visit to a group of churches, each of which has its particular charm, and all of which are replete with jaw-droppingly magnificent works of art. In most of our visits, we were amongst a small number of visitors, so we really had time to look at everything. Some highlights for me were the Frari, of which more later, the aforementioned Madonna dell’Orto, with its Tintorettos – he is buried there – and Sant’Alvise, with its amazing ceiling. But everywhere the visitor is ambushed by the rich artistic heritage of the place, and it’s almost impossible to single out particular sites for a special mention.
That’s what I am going to do for the Frari, though, if only because we spent more time in there. We visited in the daytime, and were suitably bowled over by such items as the Bellini altarpiece, the various Titians, and the beautiful interior, with its stupendous scale. We noticed that a concert was to be held the next day. We went, and it was one of the highlights of the holiday. The Frari is the church where Monteverdi, maestro di cappella of San Marco, is buried, and where Philip Thorby, the leading scholar-performer of early music, had assembled a choir, soloists and orchestra to play the 1610 Vespers in the year of their 400th anniversary. This was sublime. The music, which as maestro Thorby pointed out in his bilingual introduction, would have seemed daringly avant-garde to a contemporary audience, echoed beguilingly around this impossibly sumptuous building. Thorby laid a wreath at Monteverdi’s tomb at the end of the performance, to rapturous applause. And it was ingresso libero, too!

We did use the vaporetti in order to visit San Michele, the cemetery island, and the subject of a moving poem by Simon Barraclough. We found the graves of Ezra Pound and Stravinsky, as well as some unexpected ones, often British exiles. We also visited the Lido, where the famous Hotel des Bains, as featured in Visconti’s Death in Venice, is now closed and covered with scaffolding as it is turned into apartments, but where there is a remarkable art nouveau exterior at the Hotel Ausonia: 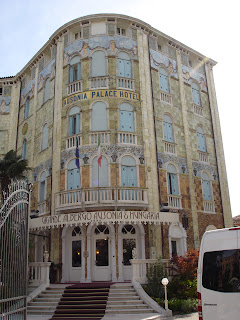 The most rewarding journey to the outer islands was to Torcello, the original settlement of the refugees who created Venice. There, the church of Santa Maria Assunta contains some thousand year old mosaics, and a wonderful display of Byzantine religious art. And you can sit on a throne carved out of rock, allegedly used by Attila the Hun…

On several evenings we escaped the tourist hordes to enjoy a quiet drink in one of the biggest campi, the Campo San Margarita, where young kids charged around playing football whilst their mums gossiped. 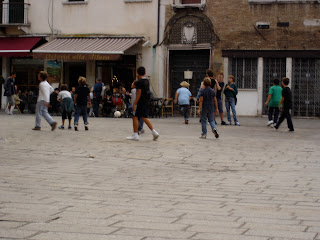 This seemed a much better bet than a visit to Florian’s at San Marco, where a coffee will set you back at least €10, with a further €7 if the band is playing insipid cocktail jazz or easy-listening classics at the time. For two people, having a quick drink and a cake can easily cost thirty quid. Nearby places will serve you delicious coffee for less than a quarter of Florian’s price.
There’s lots more to say, and I’ll return to the Venice theme again, I suspect.