Look Back at Angers

To Angers, for the fourth international colloquium at the Anthony Burgess Centre, this time focusing on Burgess’s encounters with the Elizabethans. It was, as usual, a very enjoyable event, and it was great to meet up with old Burgessian pals, and to make some new ones. Angers is a very pleasant town, with a chateau, some delightful Renaissance architecture, and some very fine shops. Our hosts, as ever, did us proud: this is the only conference I go to where lunch is a two-hour affair with a choice of three fine wines. As Sterne said, “They order this matter better in France.” Not much time for sightseeing on this occasion, but the curious traveller in this part of the world should certainly check out the chateau, and particularly the tapestry depicting the Apocalypse: it’s 100 metres long (of an original 140m) and was made between 1373 and 1382 for Louis I of Anjou. It is a stunning piece, set in its own spacious room at the chateau. 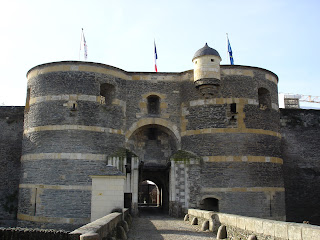 The town itself has something to delight the eye around every corner, such as this: 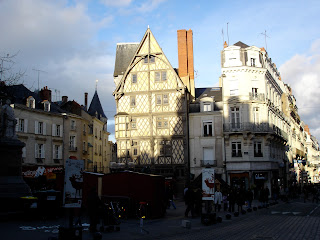 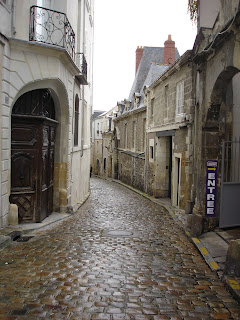 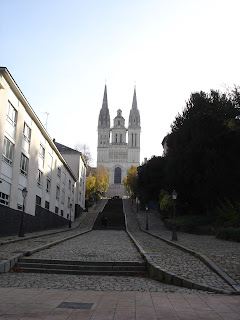 More images are available all over the web. The city website is much animated by the arrival of the tramway, which will run through the town, and which is nearing completion at the moment.

The colloque went very well, with some very interesting and stimulating papers from some of my fellow Burgessians, including Alan Shockley, Katherine Adamson, Jonathan Mann, Anthony Levings and Aude Haffen. Gareth Farmer’s paper was a tour-de-force worth a listen. Andrew Biswell, doyen of Burgess studies, and director of the IABF presented a paper in his usual urbane manner.  It was a great pleasure to meet and indeed eat with Charles Nicholl, our keynote speaker, and the distinguished author of The Reckoning, source of most of the information in my paper. If you haven’t read The Reckoning, you really should – it’s a detailed and fascinating account of the Elizabethan spy world. Charles’s later book, The Lodger, on Shakespeare’s time in London, also displays the depth of his learning, but in a very accessible way. All the talks were recorded, so I’m hoping some will be on the Angers web site soon.

There was no book lack in Angers, as Paul Phillips, the leading critic of Burgess’s music, was able to launch his new book on the subject. I cannily managed to purchase an unsigned copy, which I think will be a rare item in future…

Paul’s major contribution to the event was the first ever staging of Burgess’s only ballet, ‘Mr WS’, for which he conducted a large orchestra of largely amateur musicians. Friends of Topsyturvydom will know that modern interpretive dance is really not my thing, so you may be surprised to read that I was gripped throughout by the ability of four dancers to produce a mesmerising display of acrobatic and inexhaustibly inventive movement to represent Shakespeare’s life and times. It was a privilege to talk to one of the dancers, Mélisande Carré Angeli at the conference dinner, where she told me that remembering all the complex moves was simply a question of repetition. I was exhausted just watching.

So, another memorable visit to Angers. The next Burgess milestone will be 2012, and the 50th anniversary of the publication of A Clockwork Orange.

Update 30th Nov: The image of the tapestry which I linked to seems to have been removed. It was Creative Commons, and I did credit the photographer, but hey… So I’ve substituted some pictures taken whilst I was there of the chateau and the town.

Look Back at Angers by Dr Rob Spence is licensed under a Creative Commons Attribution-ShareAlike 4.0 International License.