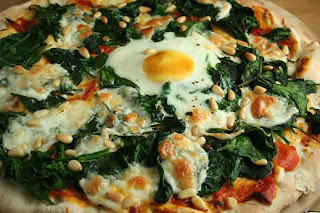 I blogged before – blimey, nearly six years ago – about the use of “no problem” as an all-purpose response by people who serve you in shops, bars etc. There was a classic instance of it last night. We went for a pre-event meal to a branch of a well-known pizza chain, whose name begins with Pizza and ends with Express. In a largely empty restaurant, we were escorted by our waiter to a back room, which was perfectly pleasant, but from where we couldn’t be seen by the passing trade on the street. We decided we were too old / too uncool to occupy the visible seats, an idea confirmed as we were joined by punters of a similar age.
Anyway, pleasant young waiter took our order. Drinks would be ‘no problem.’ The fact that we didn’t want water as well as beer would be ‘no problem’. The fact that we wanted just one salad to accompany the pizzas was ‘no problem’. Could we have a soft egg on the Fiorentina? No problem. Could we have some pepper? No problem. Could we have the bill? No problem. Could we actually have the correct bill, with the special offer price he had recommended? No problem.
Pizza Express operates a rigid recipe control system, to ensure that wherever you are, your Fiorentina is going to be the same as the last one you had. So I wish their training people would instruct waiters that the language has a number of responses that are appropriate to customer questions – of course, right away, I’ll bring it to you now, certainly… Getting staff to use them? – no problem, you’d think.

No problem revisited by Dr Rob Spence is licensed under a Creative Commons Attribution-ShareAlike 4.0 International License.

In this day and age
Rue des Mensonges
Comments (4)